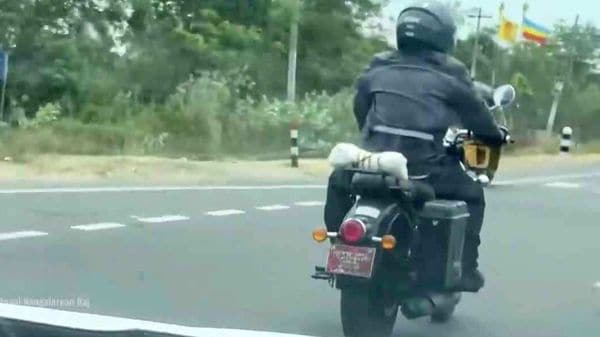 Royal Enfield is gearing up to introduce a whole armada of new motorcycles in India. Apart from the 650 cc cruiser and the Hunter 350, the Chennai-based two-wheeler maker also has a fully updated Classic 350 in the pipeline which is in its final development stages.

The new Classic 350 has now been spotted once again being tested on public roads, albeit this time around it can also be seen featuring official accessories which may be introduced in the later part.

The new image (above) shows a completely undisguised Classic 350 sporting several accessories. There is a black pannier installed on the right side of the bike which is likely fitted on a mounting rail. There is also a rear rack which should be able to hold 3-5 kg of luggage. Chances are that the company might offer these accessories optional at the time of the launch, or they may be kept on hold for a later introduction. Royal Enfield is also likely to offer its MiY program with the upcoming Classic 350 bike.

In terms of mechanicals, the bike is likely to draw power from the Meteor 350's newly developed powertrain. It is a 349 cc single-cylinder engine which uses an advanced SOHC setup and a balancer shaft in order to keep the vibrations under check. The power output from this engine has been rated at 20.2 bhp and 27 Nm. The transmission is also likely to be the same five-speed unit.

After the Meteor 350 and Himalayan, the new-gen Classic 350 is expected to receive the brand's Tripper turn-by-turn navigation system. This feature allows the rider to connect their smartphones to the bike via Bluetooth.