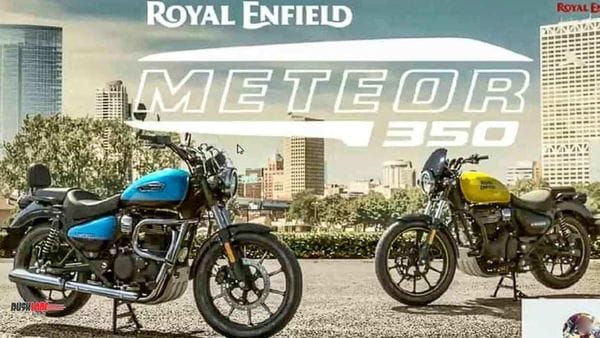 Royal Enfield Meteor 350 will be made available in three trims. Image Credits: Rushlane.com

Royal Enfield is gearing up to launch the much-anticipated Meteor 350 in the Indian market soon. The Meteor 350 will be a replacement to the Thunderbird 350X which has been taken down from the company's portfolio already.

As revealed in the past, the Meteor 350 will be made available in three variants - Fireball, Stellar and Supernova. The entry-level Fireball variant was leaked in studio images a few months back.

The 'Fireball' variant will be launched in two colour options including yellow and red. It will feature decals instead of a 3D badge. It will also miss out on certain chrome bits along with other styling features reserved for its higher variants.

There will be a 'Tripper Navigation' feature which will be offered as standard on all three variants. It is most likely company's version of Bluetooth-enabled GPS system. Such a feature is also seen on latest products from TVS and Hero MotoCorp.

The higher-spec Stellar and Supernova will be launched in different colour schemes and will be equipped with a set of different exterior features. While the Stellar trim will sport chrome exhaust system and handlebar along with a back rest of added pillion comfort, the top-spec Supernova will feature machined finished wheels, a different seat cover, chrome indicators and a windscreen.

The launch of the new Royal Enfield Meteor 350 is expected to take place towards the September end. Currently there are no bikes from other automakers which stand as direct rivals to the upcoming Meteor 350.

More information on the bike will be revealed near the launch.