Ola Electric's Hypercharger network is being installed in public places like BPLC petrol pumps as well as residential complexes.
By : Sabyasachi Dasgupta
| Updated on: 29 Dec 2021, 08:52 AM 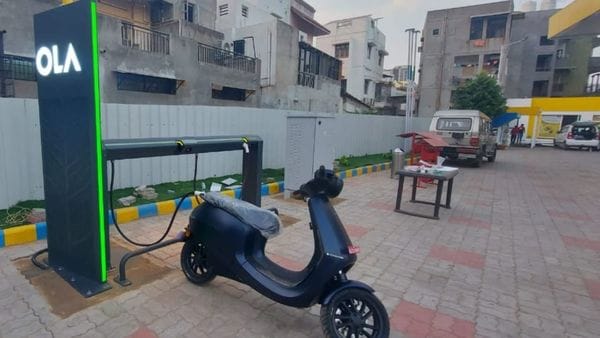 Ola begins to set up Hyperchargers for e-scooters, aims to hit 4,000 by 2022. (photo courtesy: Twitter/@bhash)

Ola Electric has started to install its charging network called Hypercharger across the country days after it started to roll out its electric scooters S1 and S1 Pro to its customers. Bhavish Aggarwal, CEO and co-founder of Ola Electric, shared the update while revealing the EV maker's plans to increase the charging infrastructure in coming days.

Aggarwal took to social media platform Twitter to announce that Ola Electric aims to set up more than 4,000 such charging points for its electric scooters across India by the end of the year. The Hyperchargers are currently being installed at public places like BPCL petrol pumps, as well as residential complexes to cater to its S1 and S1 Pro customers.

“Hypercharger roll out has begun across cities. At key BPCL pumps as well as residential complexes. 4000+ points up through next year. We’re installing across India and will make them operational in 6-8 weeks. Will be free for use till end June 22 for all customers," wrote Aggarwal on Twitter.

In October, Ola Electric had announced the launch of its first Hypercharger. The company had earlier announced that it will set up charging support for its customers under its 'Hypercharger' setup that will be installed in over 100,000 locations/touchpoints across 400 Indian cities.

Ola Electric's Hyperchargers will be capable of charging e-scooter batteries from 0 - 50% in just 18 minutes, making it fit for a half cycle range of 75 km. A home-charger unit, however, will also come as standard with each unit purchased.

Hypercharger roll out has begun across cities. At key BPCL pumps as well as residential complexes. 4000+ points up through next year.

We’re installing across India and will make them operational in 6-8 weeks. Will be free for use till end June 22 for all customers. pic.twitter.com/WKEzok4E98

The Ola Hypercharger promises a seamless charging experience for users. All one needs to do is to arrive at a point in the Hypercharger Network and plug the electric scooter to a charging point. One will be able to monitor the status in real time using an Ola Electric app which will also enable payment for the service.

The company's website lists out a city-wise plan of charging network locations and the majority of Tier I and Tier II cities would be covered under its charging network.