As Ola Electric begins delivery of its S1 and S1 Pro electric scooters, the EV maker is beginning to feel the pressure of global chip crisis.
By : HT Auto Desk
| Updated on: 24 Dec 2021, 11:17 AM 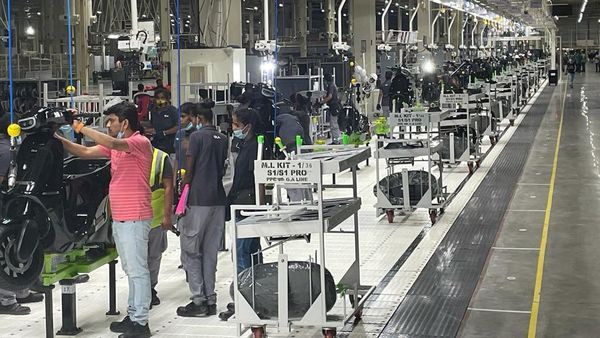 An image of Ola Electric workers at the assembly line of the S1 and S1 Pro electric scooters at its Futurefactory in Tamil Nadu ahead of delivery deadline of December 15. (Photo courtesy: Twitter/@bhash)

Ola Electric, one India's latest EV startups, aims to turn its Futurefactory in Tamil Nadu as the biggest hub for electric vehicles in the world. The facility, which was built within a year, has the capacity to roll out 20 lakh electric scooters every year. As Ola goes full steam with production of its first products, questions remain whether the dream of world's largest EV factory will turn true any time soon.

Ola Electric has so far received around 90,000 bookings for its e-scooters. Though the EV maker has not revealed the production numbers yet, the company is currently facing the challenge to deliver them to customers within promised timeline. However, according to a Bloomberg report, mass production of Ola's e-scooters is likely to be pushed back until at least January.

Ola Electric began delivery of its S1 and S1 Pro scooters from December 16 after a delay of almost four months after the much-anticipated models were launched as early as on August 15. Ola had earlier blamed supply issues for the delay, much to the dismay of millions who had booked the e-scooters for a mere ₹499. When the wait finally got over, customers have not really got what they have paid for.

(Also read: Ola Electric to start delivery in new cities. Check if yours is on the list)

Several Ola customers took to social media complaining about less range than the promised 181 kms for S1 Pro. The company had to issue a clarification saying that the true range for Ola S1 Pro is 135 kms, with conditions like only one rider weighing less than 70 kgs riding in normal mode in city conditions where roads do not have inclines more than five per cent and no extra load on the vehicle.

The ARAI certified range of Ola S1 Pro is 181 kms basis their test conditions. The True Range for Ola S1 Pro is 135 km. For more details, please refer to the attached image below. pic.twitter.com/MmFZqgaQts

Several other customers complained about the software which is not updated in some of the scooters already delivered. When HT Auto took out the S1 Pro for a test ride last month, the company had said the it had the beta version software. However, it assured it will be updated before delivery begins.  Ola promised a lot of features in its S1 and S1 Pro scooters.

One of the biggest reasons behind Ola's struggle to meet deadline is the supply chain issue. It is struggling to overcome the crisis to make no more than 150 units a day, which is much less than the facility's advertised capacity of 20 lakh per year.

Ola Electric, like almost every other vehicle manufacturer in India, depends on China for some of the critical components. India currently imports around 70% of electric vehicle-parts from China. Varun Dubey, Chief Marketing Officer at Ola Electric, was quoted by Bloomberg saying that the Futurefactory is "is “operational with automated weldline, battery line and the general assembly line and an installed paint shop. We had a minimal delay of two to four weeks instead of much longer delays (months and up to a year) that are common in the industry." Bhavish Aggarwal, CEO at Ola Electric, had earlier termed the global chip crisis as ‘an unpredictable beast for everybody’.

Beyond the supply crisis, Ola Electric has other problems too. The company’s body shop is operating at half capacity and its paint shop isn’t up and running. According to. Bloomberg, Ola’s scooters are currently sent to a plant owned by. South Korea’s Seoyon E-Hwa near Chennai for the paint job.

The pressure to deliver its electric scooters has reached a level where Aggarwal is reportedly summoning team to meetings at 2 am. The company is also battling with attrition even in its early days with a number of executives in the top management leaving the company in recent times, including Chief Financial Officer Swayam Saurabh, Chief Operating Officer Gaurav Porwal, quality assurance head Joseph Thomas and General Counsel Sandeep Chowdhury.

The pressure is likely to increase on Ola Electric in coming days if it aims to hit 20 lakh production target every year. It is still much less than 1 crore target CEO Aggarwal had set to hit by the middle of next year, which essentially means Ola needs to produce one electric scooter every two seconds.

Question is, whether Ola Electric can overcome its reliance on components from China and other challenges to achieve its dream for the world's largest EV manufacturing factory any time soon.