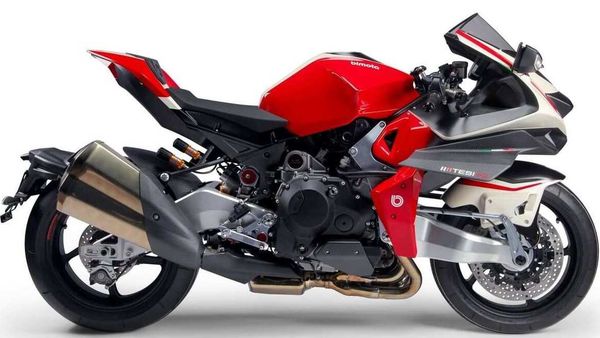 Bimota, the Italian superbike maker has announced that its Tesi H2 hyperbike is slated to go into production this September. For the uninitiated, the Tesi H2 is based on the Kawasaki's Ninja H2.

The track testing of the Tesi H2 is already underway and its spy images have surfaced online revealing newer details on the bike. The Bimota Tesi H2 was first showcased to the world in November last year at the EICMA 2019. During the same time, Kawasaki also announced that it's buying 49% stake in Bimota.

The Tesi H2 sources power from its Ninja H2 borrowed supercharged engine, moreover, some of its other highlights include hub-centre steering and extensive use of carbon-fibre which lends it an exotic appeal.

The bike is capable of pumping out a blistering 228 PS of maximum power at 11,500 rpm. For the record, this is at par with the Ninja H2.

Also, what's interesting to note is that at 214 kg (kerb), it weighs close to 24 kg less in comparison to its Japanese rival. That’s despite the fact that it gets a bulky swingarm at the front that's notably heavier than the traditional forks.

While the Tesi H2 was originally planned to go on sale in June this year but the coronavirus outbreak threw a wrench in its launch plans. In September this year, close to 20 units of the Tesi H2 are expected to be produced.

(Also Read: Kawasaki Ninja ZX-25R has been launched and it's cheaper than you think)

As far as pricing goes, it is going to be even costlier than the Kawasaki Ninja H2 (in the international market) which for reference retails at around ₹35 lakh in India.