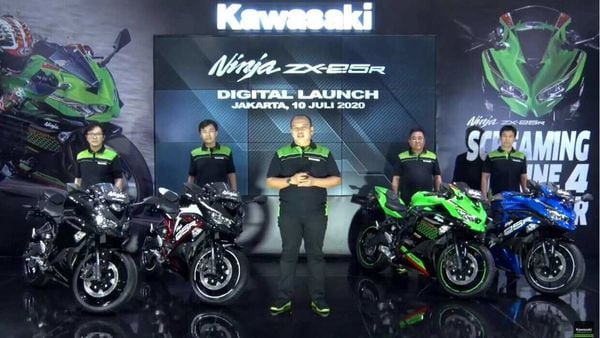 Kawasaki has finally introduced the much-awaited Ninja ZX-25R in the Indonesian market at a starting price of IDR 96 million which converts to ₹4,99,071 for the Standard Edition. There is also a higher-spec Special Edition which costs IDR 112.9 million (equivalent to ₹5,86,929).

Till date, the company has kept the official output figures of the bike undercover, but the details are public now. Its 249cc inline 4-cylinder liquid-cooled powerplant is capable of delivering 50 PS at 15,500 rpm and 22.9 Nm of torque which peaks at 14,400 rpm. This engine is capable of revving up to 17,000 rpm which is mad for a bike of its size.

The company has also provided an option of RAM air intake which marginally increases the power output to 51 PS. The power figures may not seem too intimidating on paper but not to forget, it is after-all just a quarter-litre bike. Its engine comes hooked to a 6-speed transmission.

Its suspension kit includes 37 mm Showa SFF-BP fork and a rear monoshock. The braking duties are performed by a single 310 mm front disc with a radially mounted monobloc caliper and a 220 mm disc which sits at the rear-end.

Kawasaki is likely to introduced the bike in India by first half of 2021. As far as pricing goes, expect the bike to be priced somewhere around ₹6.5 lakh to ₹7 lakh.