The new-gen Hayabusa has been priced at ₹16.40 lakh (ex-showroom).While the new-gen Busa stands slightly costlier in comparison to the previous model, it is still selling faster than hotcakes.
By : HT Auto Desk
| Written By : Prashant Singh
| Updated on: 20 Jul 2021, 11:25 AM 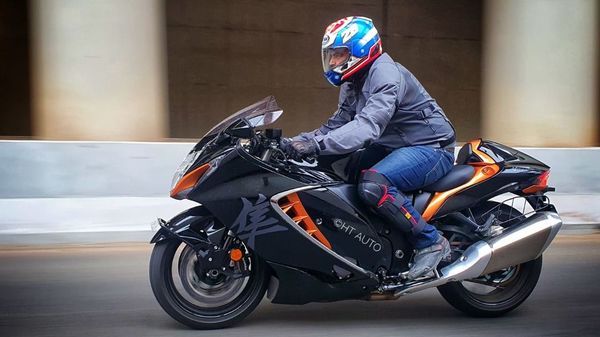 Suzuki Hayabusa entered its third generation when it was launched in India in late April at a price tag of ₹16.40 lakh. (HT Auto/Sabyasachi Dasgupta)

Suzuki Motorcycle India introduced its new-gen Hayabusa sports touring motorcycle in the country earlier this year. The new Busa has been priced at ₹16.40 lakh (ex-showroom). At this price tag, the new motorcycle is close to ₹2.65 lakh more expensive than the model it has replaced. Initially, the first lot of the motorcycle was sold out within days of the bike's launch, and the company recently announced the allotment of the second batch.

In June 2021 sales, the Hayabusa has managed to garner a total of 35 unit sales, in comparison, the Japanese motorcycle maker sold just 20 units of its Intruder 150 cruiser bike last month.

While the new-gen Busa stands slightly costlier in comparison to the previous model, but it is still selling faster than hotcakes thanks to the cult status the motorcycle enjoys. HT Auto has also reviewed the new Hayabusa recently. Read the full review here.

With the generation change, the Hayabusa has received some prominent changes inside out. It's blessed with a full new-age electronics pack that make it a more manageable and safer motorcycle to ride. On the outside, there is a sharper exterior body with new graphics and design.

With the new-gen update, the Hayabusa has received new features including a six-axis IMU, traction control, a ride-by-wire throttle, launch control, full-LED lighting, anti-lift control, a TFT screen and more.

In terms of mechanical updates, there is an updated 1,340cc, inline four-cylinder engine that is now BS 6-compliant. The engine comes mated to a six-speed transmission. In addition, it has also gained an updated suspension setup, grippier Bridgestone Battlasx Hypersport S22 tyres, as well as higher-spec Brembo brakes.