Suzuki Motorcycle India to resume 2021 Hayabusa's bookings on this date 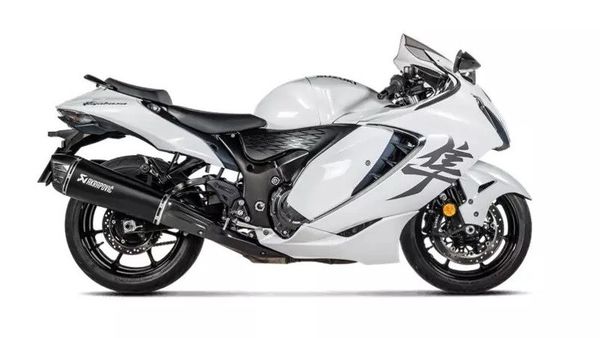 Akrapovic has previously launched a new slip-on exhaust for Hayabusa.

The new-gen Suzuki Hayabusa was launched in the Indian market earlier this year. The first lot of the superbike was limited to just 101 units which were sold out in a matter of just a few days as soon as the sports tourer went on sale in the country.

Now the Japanese automaker has announced the arrival of the new batch and the company is all set to resume bookings of the bike on July 1st at 4 PM. The token amount for the bookings has been kept at ₹1 lakh. Needless to say, the motorcycle will be available in limited numbers.

The new-gen Suzuki Hayabusa has been priced at ₹16.40 lakh (ex-showroom) in the Indian market. At this price tag, the new motorcycle is close to ₹2.65 lakh more expensive than the model it has replaced.

With the new-gen update, the Hayabusa has been given a range of tweaks including a fully updated electronics package. It now comes with a six-axis IMU, launch control, full-LED lighting, traction control, a ride-by-wire throttle, anti-lift control, a TFT screen and more.

At the heart of the new Hayabusa sits an updated 1,340cc, inline four-cylinder engine that now comes updated with BS 6-compliance. The engine comes mated to a six-speed transmission.

While the overall power output of the Hayabusa has gone down, as per Suzuki, the new update has improved the engine performance in the low and mid-range. The bike has also gained a new suspension set up, grippier Bridgestone Battlasx Hypersport S22 tyres, and higher-spec Brembo brakes.

The Hayabusa is a direct rival to the likes of the Kawasaki Ninja ZX-14R.