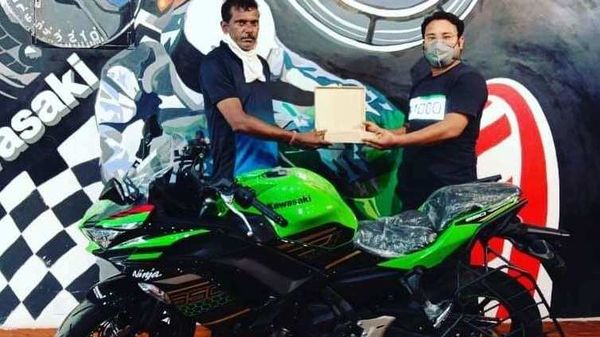 Kawasaki introduced the updated 2020 Ninja 650 BS 6 in India a few weeks back at ₹6.24 lakh (ex-showroom, Delhi). With operations slowing getting back on the track after a slump in the last few months, the company has now started delivering the bike to the customers.

With the latest update, the Ninja 650 has turned dearer by ₹35,000. The most significant change on the motorcycle is in the form its BS 6 compliant 649 cc parallel-twin engine. The mechanical setup now features a revised exhaust and airbox.

Even though the engine has been tweaked in accordance to the stricter (BS 6) emission norms, its power output hasn't changed. It still delivers the same (68 PS) of power but the torque has been lowered to 64 Nm. The engine comes mated to a 6-speed transmission and is offered with standard slipper clutch feature. The bike also gets the same overall weight of 196 kgs.

Apart from the mechanical updates, the 2020 Ninja 650 BS 6 has also received a redesigned front-end which is a reminiscent of the latest Ninja 400, ZX-6R bikes. It now features a longer snout and LED head lights. The tail light has also been revised and the bike now receives a 4.3-inch colour TFT display with Kawasaki's Rideology app connectivity. Save for these updates, the bike remains the same.

Kawasaki has recently ordered recall for the MY 2020 Ninja ZX-10R bike in the US. This recall has affected as many as 1,529 units. The recall is said to be announced due to a programming error in the bike's Engine Control Unit (ECU).