The 399 cc parallel-twin motor engine of the new Kawasaki Ninja 400 is BS 6 compatible. Besides the upgraded engine, the motorcycle has also received other key updates.
By : HT Auto Desk
| Updated on: 25 Jun 2022, 10:18 AM 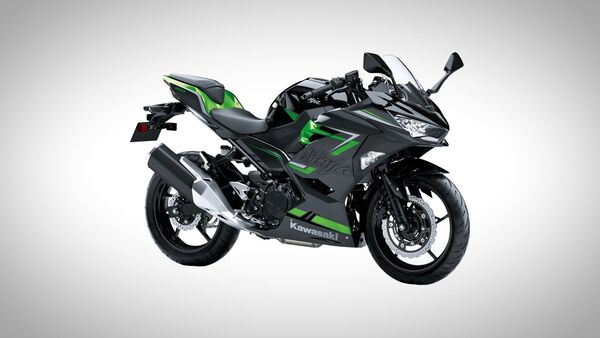 Kawasaki Ninja 400 BS 6 has been launched in India at a starting price of ₹4.99 lakh (ex-showroom).

Japanese two-wheeler manufacturer Kawasaki has launched the new Ninja 400 motorcycle in India with a BS 6-compliant engine. The 2023 Kawasaki Ninja 400 BS 6 is available at a starting price of ₹4.99 lakh (ex-showroom). The motorcycle was previously discontinued back in April'20 due to emission norms.

In the new generation, the Ninja 400 comes equipped with an upgraded engine, as well as several changes in terms of features and specifications. Kawasaki will sell the new Ninja 400 BS 6 motorcycle in India via the Completely Built Unit (CBU) route and the new bike continue to rival the likes of KTM RC 390 and the TVS Apache RR 310.

The Ninja 400 BS 6 will be powered by the same 399 cc, parallel-twin, liquid-cooled engine which now is also compliant with Euro 5 norms. Apart from updating the emission compliance on the engine, Kawasaki hasn't introduced any other changes to the powertrain. The final output from this engine stands at 44bhp and 37Nm of peak torque. When compared to the previous BS 4-spec engine, the overall power output remains the same, but the torque has come down by 1 Nm. The transmission is the same 6-speed unit which also comes with a slipper clutch mechanism.

As far as other changes are concerned, the new Kawasaki Ninja 400 BS 6 also gets styling upgrades. The motorcycle will be offered in a Lime Green colour scheme with race-inspired graphics. This is the same one that is sold in global markets as the KRT Edition of the motorcycle. The bike gets a slim twin LED headlamps, inspired by Ninja H2, with high-beam and low-beam functionality. The 2022 Ninja 400 also gets an updated slip-and-assist clutch.

The bike also features split-style seat, a 14-litre fuel tank and a side-slung exhaust with dual-tone finish. The Kawasaki Ninja 400 BS 6 stands on a pair of 17-inch wheels and has a ground clearance of 140 mm. It will have 41 mm telescopic forks at the front and adjustable monoshock at the rear. For braking, it uses petal disc with 310 mm dual piston caliper at the front and 220 mm dual-channel ABS at the rear.