Some of the main features of the CFMoto 300SR include its fully digital instrument console (TFT display) and riding modes.
By : Prashant Singh
| Updated on: 04 Mar 2020, 17:59 PM 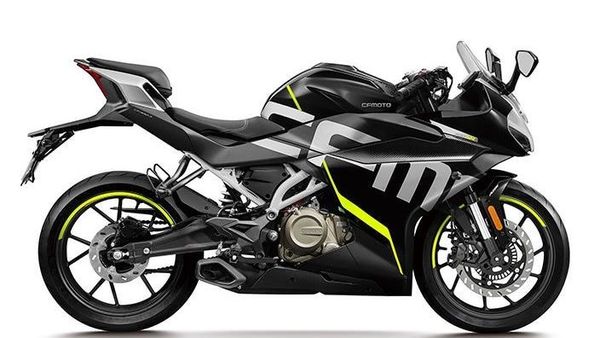 Apart from the quarter-litre CFMoto 250SR, the company has now also pulled the covers off the bigger 300SR motorcycle. The same is bound to hit the Indian market in the days to come.

In terms of the exterior appearance, the motorcycle looks exact replica of its quarter-litre counterpart the 250SR. It gets the same dual-beam front headlamps with boomerang-shaped LED DRLs on its outer ends. The side body features a partially uncovered fairing with rear sub-frame peeking out in contrast colouring. The 'CFMoto' livery runs wide across the sidebody making the bike look highly sporty and intimidating. Its overall body fairing has been given a very aerodynamic deign, which is further complemented by its split seat set-up, sharply pointed tail-end design sporting a sleek looking LED tail lamp. Overall, the silhouette of the CFMoto 300SR looks very aggressive.

As for the mechanicals, the CFMoto 300SR features a Euro 6 compliant 292.4 cc, single-cylinder, liquid-cooled engine featuring DOHC setup. The system packs Bosch EFI (Electronic Fuel-injection). It has been rated to deliver 28.6 bhp of maximum power at 8,750 rpm and 25.3 Nm of peak torque at 7,250 rpm. The powertrain comes mated to a 6-speed transmission and also features a slipper clutch set-up.

The company claims that the 300SR's powertrain feature a dual-coated piston which contributes in reduction of frictional losses. That said, it also gets a unique noise-reduction technology which helps in curbing down engine vibrations and noise, thus smoother performance. The company has also given the system a built-in balance shaft which allows the engine to rev smoothly throughout the range.

Some of the main features of the CFMoto 300SR include its fully digital instrument console (TFT display). This unit is highly similar to the one found on the 300NK (already sold in India). Moreover, the bike also gets two riding modes - Eco and Sport. The first mode is used to attain maximum fuel efficiency, while the latter promises to deliver a more sportier performance.

Several media reports suggest that the CFMoto 300SR could be launched in the Indian market later this year, most probably near the year-end. Expect the pricing to rage somewhere around ₹2.3 lakh to ₹2.5 lakh (ex-showroom).