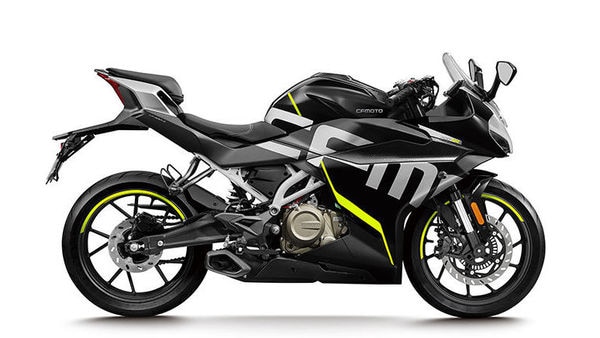 The CFMoto's quarter-litre sports bike was always under the speculative radar, but today the Chinese automaker has put a pin on all the speculations by officially pulling the covers off the motorcycle.

If you recall, the bike was spotted several times in the past in its home market which gave a fair idea of its exterior design and body dimensions. Speaking of which, as now revealed in the official studio images, the motorcycle looks quite appealing in its final production avatar and shares the same design as its bigger sibling the 300SR.

At the front, the CFMoto 250SR gets a sleek looking twin-LED headlight setup with C-shaped LED DRLs added on to the outer sides. The fairing appears to be very aerodynamically styled with 'CFMoto' livery running wide across the side body panels. The split seat set-up also contributes to a very sporty stance of the bike, and that along with the partially uncovered sub-frame adds to its masculinity. At the rear, LED tail lamp gels well with the overall styling of the motorcycle. Moreover, its contrasting colour schemes look quite unique and contribute to its extra oomph factor.

The bike features a fully-digital TFT display, similar to the one found on the CFMoto 300NK (already present in the Indian market). Its braking duties are taken care by a single 292 mm disc (front) and 220 mm disc (rear). In China, the bike is available in two versions, ABS and CBS.

As far as the Indian launch goes, the CFMoto 250SR might not make its way to the country anytime soon, but the company might introduce the 300SR around mid-2020. The same looks exactly as the quarter-litre counterpart, in terms of exterior looks and design. In the Chinese market, the 250SR has been given a price tag of CNY 18,580 ( ₹1.91 lakh) for the CBS version and CNY 21,680 ( ₹2.23 lakh) for the ABS version.