Honda has filed the trademark MotoCompacto pointing towards a possible return of the classic MotoCompo folding scooter.
By : Prashant Singh
| Updated on: 31 Jul 2020, 03:01 PM 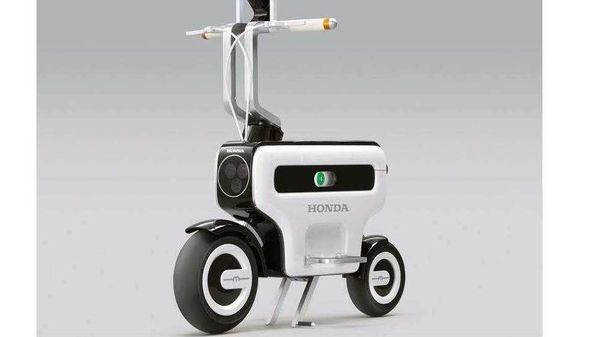 Honda has filed a patent which goes by the name 'Motocompacto', hinting that the classic suitcase-sized petrol-powered MotoComp could soon return in a modern avatar.

While a concept (above), looking like a modern-day Honda MotoCompo has been doing rounds on the internet for quite sometime, it's nothing more than a modern interpretation of what the suitcase-sized two-wheeler could look like, if launched today.

For the uninitiated, the Honda MotoCompo was originally introduced around 1981 and continued to be produced till 1983. It was designed to fit the boot of Honda’s small cars of the bygone era - Honda Today and City. Both the cars had boot space that could accommodate the folding motorcycle. Albeit, being on sale for just a couple of years, MotoCompo accounted for over 50,000 sales. It also gained reputation among petrolheads for its quirky design.

While the classic MotoCompo employed a traditional 2.5 PS 49 cc gasoline powered engine, the new-age MotoCompacto could most-likely be a battery powered offering. Also, the recent patent application confirms the same, stating that its name is intended for “land vehicles, namely, electric scooters." If the concept holds ground, the new scooter is expected to feature removable batteries for a more convenient experience. It will be good to deliver an estimated range of close to 40 miles and will have a full charge time of 2 hours. Expect the top speed to be around 28 kmph to 30 kmph with power being channeled from a 500w motor.

As far as launch is concerned, there is no official confirmation when the MotoCompacto may make the transition from concept to an actual production model. Also, it is yet not confirmed if Honda is actually working on this project at all. The patent might just have been earmarked for future use.

If launched, it could be a brilliant product for a market like India. Honda, are you listening?