Hero MotoCorp is churning out sanitisers at its manufacturing facilities where two-wheeler production is currently at halt as per the Government's directives.
By : Prashant Singh
| Updated on: 20 Apr 2020, 09:01 AM 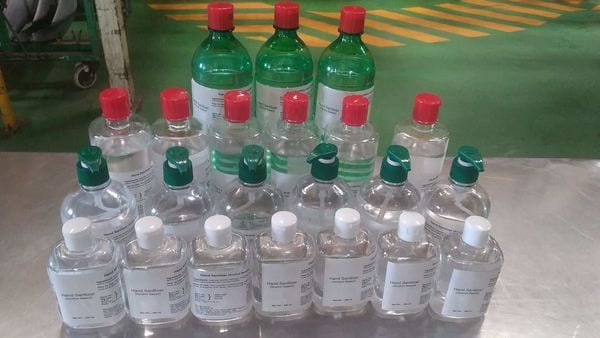 Production of sanitisers is going on at Hero's bike manufacturing facilities.

Hero MotoCorp on Sunday announced that to further enhance its various initiatives towards the Covid-19 relief efforts, it has manufactured and distributed over 5,000 liters of sanitisers. This medical help has been given to the authorities and under-privileged people.

It said that production of sanitisers is going on at its plants where two-wheeler manufacturing is currently halted as per the Government's directives.

The company also mentioned that it has distributed more than 4 lakh units of protective face-masks already.

Its select employees belonging to the production and CSR teams are deployed at various locations for production and distribution of sanitisers and masks, and help in various relief efforts.

The company's canteen kitchens located at its manufacturing facilities across the country is currently involved in providing meals and food packages to the needy. Till date, Hero MotoCorp has already distributed more than 3 lakh meals (15,000 meals daily) to laborers, daily wage-workers, and homeless families stranded in areas of Delhi-NCR, Rajasthan, Haryana, Uttarakhand, Andhra Pradesh and Gujarat. Also, it has donated more than 6,000 ration kits as a part of the relief initiative.

That said, previously it gave 60 first-responder mobile ambulances to the authorities working in rural and remote regions around the country. These motorcycle are custom made to around the Xtreme 200R. Its ambulance accessories' kit comes packed with features such as first-aid kit, oxygen cylinder, fire extinguisher, siren along with a lay-down bed for the patient. These mobiles ambulances are capable of penetrating several rural and remote areas which may be hard to reach for the regular-sized vans.

Additionally, the company has also donated 2,000 motorcycles as a part of the relief efforts.