The new Ducati SuperSport is likely to launch in the Indian market in two variants - Standard and S.The 2021 SuperSport by Ducati has received some significant styling changes that comprise new sharper looking V4-inspired headlamps and redesigned body panels.
By : HT Auto Desk
| Updated on: 25 Aug 2021, 08:54 PM 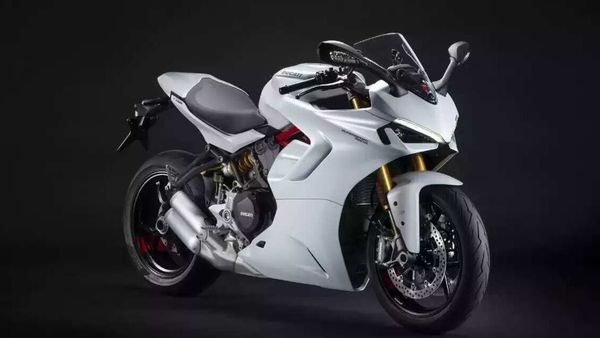 For 2021 the Ducati SuperSport has received a significantly updated exteriors.

After the new Ducati Multistrada V4 which was introduced in the Indian market a few weeks back, the company is now gearing up to introduce the new SuperSport 950 BS 6 in the country. The Italian premium bike maker has teased the arrival of the bike on its social media handles hinting that the launch is just around the corner. For the record, the new Euro5/BS 6 Ducati SuperSport 950 bike is already on sale in the international market.

The new SuperSport is likely to launch in India in two variants - Standard and S. Both the trims are already launched internationally. While the base trim gets the standard equipment, the higher-spec variant sports a fully adjustable Ohlins suspension setup as well as a passenger seat cover.

The powertrain on both the trims remains the same 937cc, L-twin cylinder, liquid-cooled engine that is rated to produce 108.6bhp of power at 9,000rpm and 93Nm of peak torque at 6,500rpm. The transmission option includes a six-speed gearbox unit.

On the outside, the new SuperSport has received some significant styling changes that comprise of new sharper looking, V4-inspired headlamps and redesigned body panels. Apart from updated styling, there is also a new six-axis IMU that's used to gauge the motorcycle's lean, pitch, and yaw measurements. The inclusion of the new IMU system aids in rider assist features such as cornering ABS, traction control and wheelie control. The bike also gets three riding modes -Sport, Touring and Urban. In addition to that, other key updates on the motorcycle include its new 4.3-inch TFT display unit.

The new SuperSport is likely to launch in India next month. It will continue to rival the likes of the Kawasaki Ninja 1000 sport touring motorcycle.