The key highlight of Ducati's upcoming super naked motorcycle is its Stradale V4 engine which has been sourced from the Panigale V4.
By : Prashant Singh
| Updated on: 08 May 2021, 02:45 PM 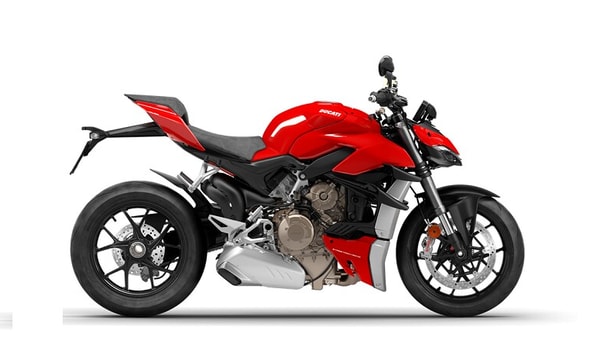 Ducati Streetfighter V4 will be priced in the range of around ₹ 19-20 lakh (Ex-showroom).

Ducati is gearing up to launch its much-awaited Streetfighter V4 in the Indian market. The launch plans for the bike were revealed in 2020 and now select Ducati dealerships have also accepting pre-bookings on the super naked motorcycle ahead of an official price announcement.

The key highlight of Ducati's upcoming super naked motorcycle is its Stradale V4 engine which has been sourced from the Panigale V4. The 1,103cc, four-cylinder, liquid-cooled engine has been tuned to pump out 205 bhp of maximum power at 12,750rpm. The bike tips the scales at just 178kg (kerb weight), which lends it an aggressive power-to-weight ratio. The transmission on the bike is a six-speed unit.

Some of the external features on Ducati's naked shotgun include an LED headlight, a fully digital instrument cluster, aerodynamic winglets, and upright ergonomics. Internationally, it is available in two trim, colour schemes. The colour options include Dark Stealth and Ducati Red. The same options are also expected to make it to the Indian market when the bike is launched in the country.

In India, the Streetfighter V4 is likely to be priced in the range of around ₹ 19-20 lakh (ex-showroom). It is a direct rival to the likes of KTM 1290 Super Duke R, Yamaha MT-10, Kawasaki Z H2, Aprilia Tuono V4, and the BMW S1000R in the international markets.

Apart from the Streetfighter V4, Ducati will also soon introduce the Multistrada V4 adventure motorcycle in the Indian market later this year.