Every inch on the Ducati Panigale V2 is crafted with so much thought, emotion, and attention to detail that it is almost poetic to look at.It is a technical successor to the Panigale 959.It carries the same basic design and architecture of the Ducati Panigale V4.
By : Prashant Singh
| Updated on: 22 Mar 2021, 10:07 AM

The Ducati Panigale V2 is a technical successor to the Panigale 959. (Image Credits: HT Auto/Prashant Singh)

The Ducati Panigale 959 passed on the baton to the Panigale V2 when the stricter emission norms kicked in last year. The V2 was then introduced in the later part of 2020 but the complications around the pandemic threw challenges that kept me away from getting my hands on the test unit for a proper road test. Finally, after a few months and several delays, the V2 arrived in the test garage, and boy oh boy, its first look was enough to get me weak in the knees.

While good-looking sportbikes come and go, but nothing comes close to the way the Italians do it. And Ducati keeps proving it time and again, that it knows its designs well, so much so that it makes some existing Japanese bikes look like a joke (including mine - a Kawasaki 650).

Coming to the V2, it gets all the basic design, architecture and size of the Panigale V4, and there is no other way Ducati could have done it better. Both look almost indistinguishable unless you know the close details. 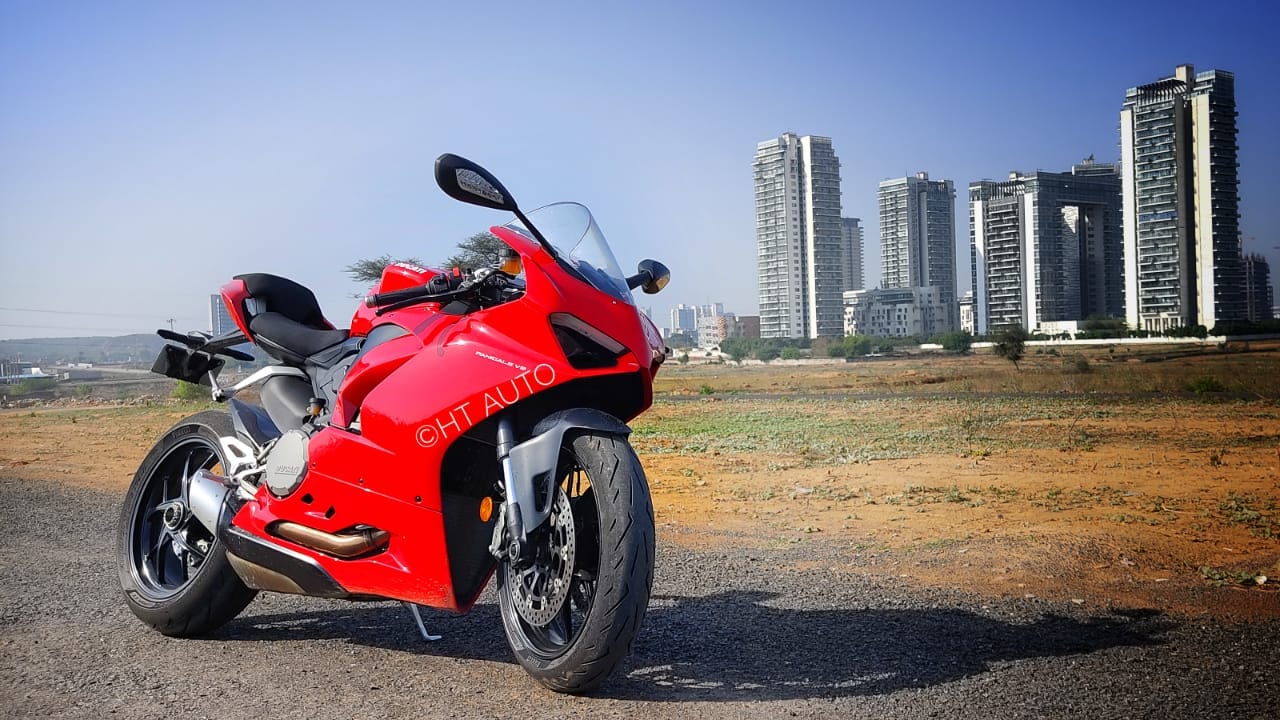 The Ducati Panigale V2 gets the basic design, architecture and size of the Panigale V4. (Image Credits: HT Auto/Prashant Singh)

At the front, the way the twin 'devilicious' headlamps of the V2 stare at you is like making eye contact with supermodel Cara Delevingne! And it doesn't stop there. Every inch on the V2 is crafted with so much thought, emotion, and attention to detail that it is almost poetic to look at. You can put a gun to my head but I can’t point out one thing, one little thing that's done wrong with the way the V2 looks. I can write a love song about it if I had to.

The whole design is not just intimidating to look at but also Ducati's focus on functionality is evident when you look at the closer details. The side fairing has been designed in a way that the boiling air from the radiator is deviated away from the rider's legs, though you do feel the heat when you are stuck in a jam-packed situation. Coming on to the back, the tail section is again designed in a way to cut the airflow and smoothen out the wind resistance at high speeds.

(Also See: In Pics: Ducati Panigale V2 is the definition of perfection on two wheels)

Swing your leg over it and you'll find yourself on a spacious saddle that lets you move around and get comfortable with its demanding riding position. Its narrow tank allows you to squeeze it between your legs easily, and then there are wide handlebars and aggressively set foot-pegs that sit at the right height to make sure that you have proper control over it because you'll need all of that.

V2's sexy external look is complemented by an equally intimidating powertrain. Though Ducati likes to project it as a middleweight motorcycle but underestimating this engine will be a colossal mistake!

The 955cc V-twin Superquadro engine borrowed from Panigale 959 has gone through several changes for the V2. There are numerous mechanical updates including new injectors, larger inlet valves, and an updated exhaust system. As a result, there is a power bump of 5 bhp, along with a 2 Nm increment in total torque output. The overall output of 153 bhp/104 Nm on the V2 makes it the most powerful middleweight sportsbike, only if you consider it middleweight with its '955 cc' powertrain.

The engine has typical twin traits in terms of power delivery. The strong low-end grunt is closely followed by a wave of torque that hits right around the mid-range (4,000-5,000 rpm) and then all hell breaks loose once you keep the throttle pinned. It becomes really hard to hold on to the bike if you are in a mood to see what's at the top end as by the time you hit 9,000 rpm, things start getting blur and then there is only a grey line and a green line, try to stay on the grey one! 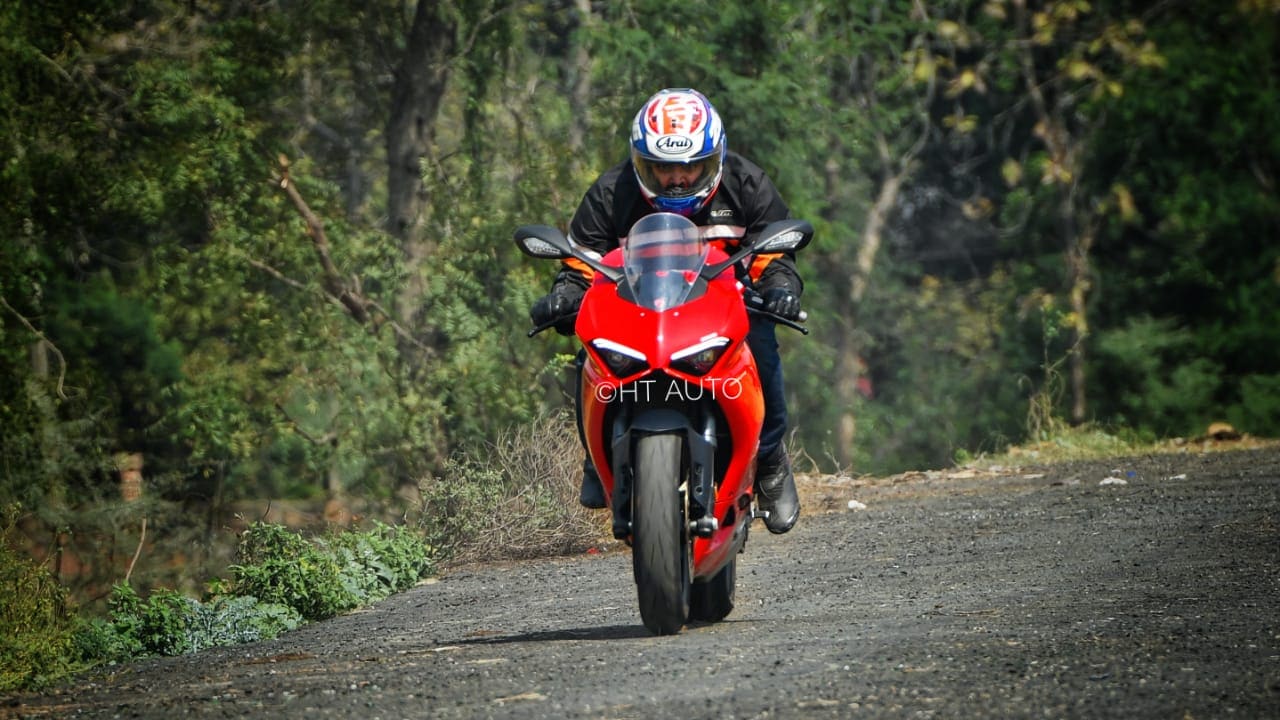 The 6-speed transmission on the bike is also slick-shifting, to say the least. It also benefits from a bi-directional quick shifter which really makes riding easy, especially when you are using all your force to hold on to the bar.

Now one of the most significant updates introduced on the V2 includes a fully updated electronics package which simply makes it one of the most well-kitted bikes in its class. For greater rider control there is a new bi-directional quick-shifter, a six-axis inertial measurement unit (IMU), eight-level traction control, anti-wheelie, three riding modes, cornering ABS, and whatnot, and it all comes standard.

It also gets a 4.3" colour TFT dashboard with a very user-friendly graphic interface which lets you go through all the informatics in a very user-friendly manner. You can choose your favorite riding mode, browse other settings and set up the electronics all through the tap of a button on the left side of the bar. 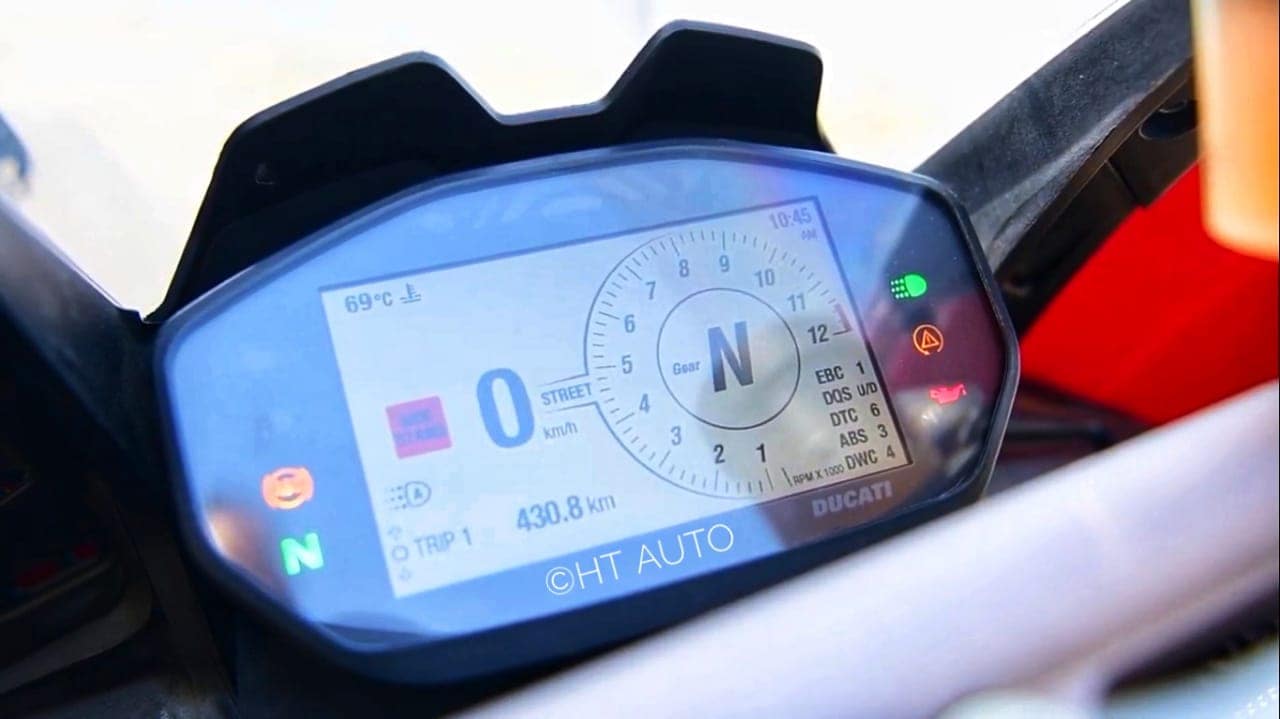 How does it handle?

The unique monocoque-frame setup is the same at Panigale 959, and at the same time, nothing has really changed in terms of the frame or steering-head angle. Albeit, it has received a new subframe to accommodate the new tail.

The V2 is lightning-fast in changing directions and no surprise, it is also highly stable while attacking corners. You can really crack the throttle open while exiting a corner, and it promises to handle all that without terrorizing the hell out of you. Stunning agility and turn speeds have always been one of the strongest characteristics of the Panigale and the V2 really shows how it's done. You can really move from one side to the other almost instantly without using too much of your body weight and that makes it easier to go fast on the twisty roads.

It feels very direct and connected to the ground and the feedback from the front end adorning the Showa Big Piston Fork (BPF) is simply astonishing. The front suspension is fully adjustable for spring pre-load, compression and rebound damping. The rear end features a fully adjustable, Sachs monoshock, which reacts to the motion imparted by the die-cast single-sided aluminium swingarm via progressive-rate linkage. In addition, it also gets a Sachs steering damper and thanks to the overall setup, it is easy doing fast corner speeds and it only forces you to push the limit every time you are trying to go deeper around a corner. And not to forget, it is really fun dancing it around hairpin bends. 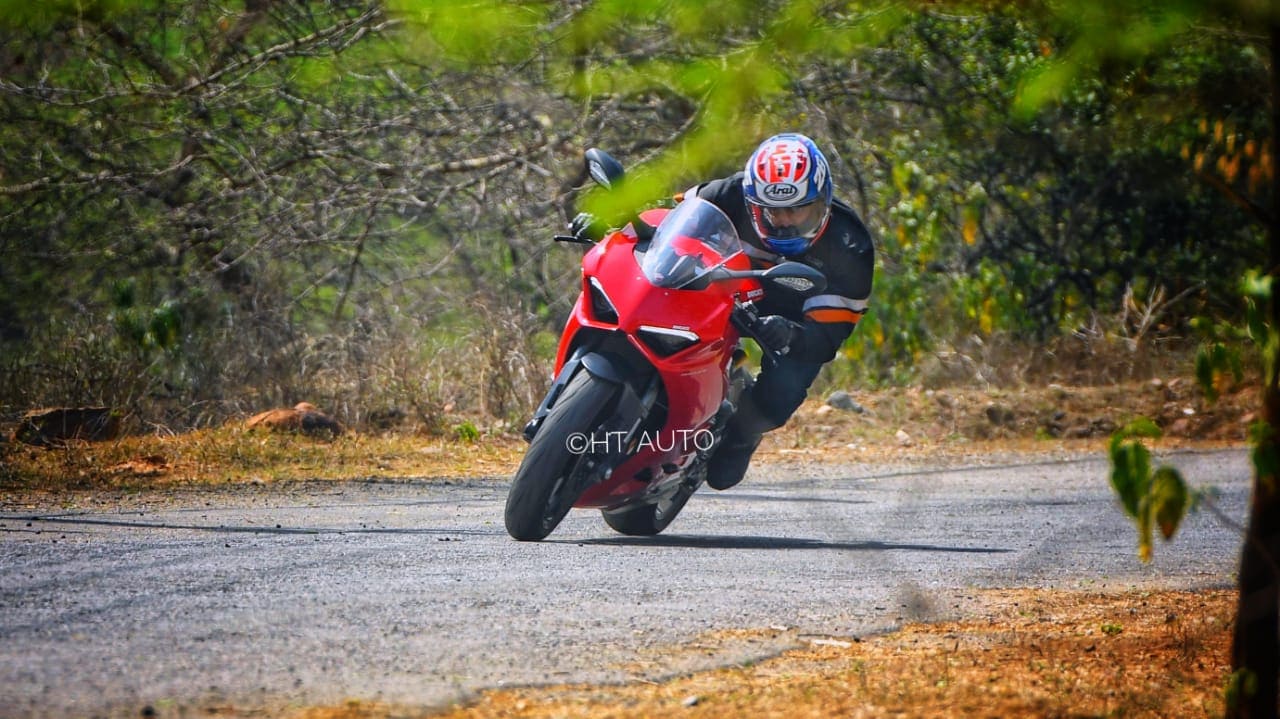 It's easy doing fast corner speeds on the Panigale V2 and the setup only forces you to push the limit every time you are trying to go deeper around a corner. (Image Credits: HT Auto/Sanjay Rohilla)

How is the stopping power?

For a bike that shoots up like a guided missile on two wheels, a very capable braking setup is required. The V2 gets twin M4.32 Brembo monobloc callipers biting on 320 mm discs at the front. The rear comes kitted with a single 245 mm disc gripped by a single Brembo calliper. A little tap on the front brake lever and the bike stops in no time while on the other hand, pull the lever a little harder and you'll feel almost like hitting an invisible wall.

Riding the Ducati Panigale V2 on public roads like ours wasn't exactly a justified way to test a proper supersport bike but the time I had with this machine was enough to make it clear that by no means it is a mid-sized bike or even stand anywhere near that category. It is a proper superbike (almost litre class) that will keep you excited and engaged whenever you swing a leg over it. You can really play around on the V2 without the constant fear that it is trying to kill you, like other full-fledged 200 bhp+ machines, and the difference is you are going to have more fun on it.

It feels like a more sensible and pocket-friendly Panigale V4 and for me, it is all that matters.