The racing livery on the CFMoto 250SR features attractive decals on the fairing, engine cowl, and side panels.Save for the paint and upgraded suspension kit, the rest of the details remain unchanged on the bike.
By : HT Auto Desk
| Written By : Prashant Singh
| Updated on: 27 Mar 2021, 12:22 PM 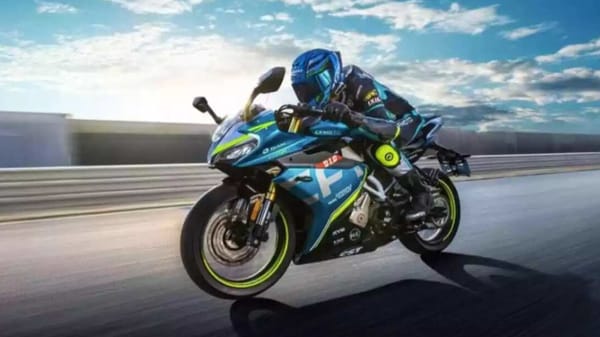 The racing livery on the 250SR features attractive decals on the fairing, engine cowl, and side panels.

CFMoto has revealed a special 'Racing Edition' of its popular fully-faired motorcycle, the 250SR. Apart from a special race-inspired livery, the bike also packs a performance update in the form of an upgraded suspension setup which sets it apart from the regular model.

The racing livery on the 250SR features attractive decals on the fairing, engine cowl, and side panels. Its suspension kit includes KYB-sourced units - 37mm upside-down front forks along with a rear mono-shock.

Save for the paint and upgraded suspension kit, the rest of the details remain unchanged on the fully-faired motorcycle. The sportier edition of the 250SR continues to use a twin-pod headlight, LED indicators, LED taillight and fairing-mounted rear-view mirrors. It also uses the same digital instrument cluster from the standard bike.

It sources power from a 249.2cc, single-cylinder, liquid-cooled engine that pumps out 27.5 bhp of power at 9,750 rpm and 22Nm of torque at 7,500 rpm. The transmission option includes a six-speed gearbox. For braking duties, the bike uses a 292mm single front disc and a 220 mm single rear disc.

For the uninitiated, CFMoto already sells its bikes in the Indian market. It has also recently launched 300NK BS 6 in India which has been priced at ₹ ₹2.29 lakh (ex-showroom). It competes against bikes such as the KTM 390 Duke and the BMW G 310 R naked streetfighter bikes. (More details here)