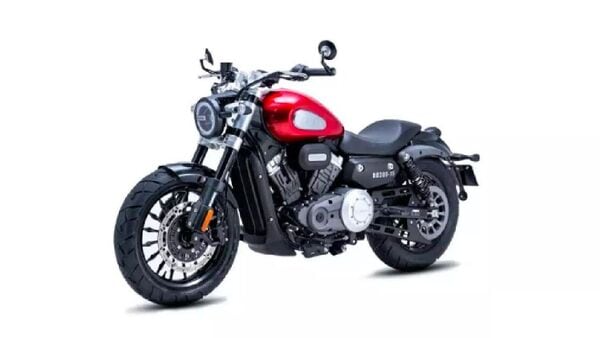 Benda Motorcycles has announced the launch of the updated 2022 Benda BD300 cruiser motorcycle in the market of China. The new BD300 comes out as a rival to bikes such as Honda Rebel 300 and also the Honda H'Ness 350. With the latest update, the bike has received several new tweaks most of which are confined to the exterior profile of the bike.

At the heart of the motorcycle sits a 298cc liquid-cooled V-twin motor that is responsible for delivering 30bhp of power and 25.3Nm of Torque. The engine comes mated to a 6-speed manual transmission and the power is delivered to the rear wheel via a belt-drive system. The bike also gets a slipper clutch as well as Traction Control System (TCS) feature.

With the newest update, the bike has received a larger instrument console which has grown bigger by 36% over the previously used unit. The digital screen now features a gear position indicator, clock, tachometer, fuel gauge, and other readouts. The bike has carried over the LED illumination featured on the previous bike.

The hardware setup on the bike comprises USD front forks and dual rear shocks. Meanwhile, the braking duties are performed by a single disc at the front and rear but with new brake pads. It rides on 16-inch alloys shoed to 130/150 (front/rear) tyres.

The bike has been launched in China at CNY 19,980 (approximately ₹2.32 lakh). At this price, it comes out as just marginally more expensive than the previously sold unit. It may not be launched in India anytime soon. In India several cruisers such as Royal Enfield Meteor 350, Yezdi Cruiser,and Honda H'Ness retail in the same segment as the BD300.