Ather 450X electric scooter retails in 14 Indian cities as of July 2021. Competition in the two-wheeler EV segment is getting heated-up with the announcement of Ola Electric scooter's arrival.
By : HT Auto Desk
| Written By : Prashant Singh
| Updated on: 23 Jul 2021, 10:13 AM 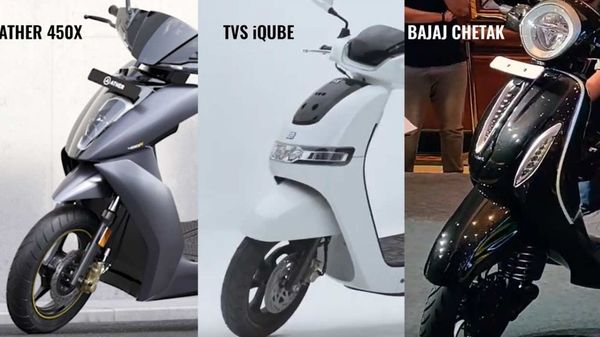 With the announcement of the upcoming Ola Electric scooter, the existing players in the EV market are pulling up socks as the competition is getting serious in the battery-powered two-wheeler segment.

(Also Read: From Ather to Ola and more, 5 real factors to consider before buying e-scooter)

Ather Energy, the Bengaluru-based startup has been successful in expanding the footprint of its electric two-wheelers in the country to 14 locations as of July 2021.

Starting up with Bengaluru and Chennai in the initial stage, the company's presence in so many cities within a matter of last few years reflects the serious intent of the electric vehicle startup. The 450X EV is already available in the majority of the metro cities including Delhi, Mumbai, Chennai and more. The company has also indicated before that more locations will be added to the list by the end of 2021.

Bajaj Auto, the Pune-based automaker has recently added three new cities to the list of Chetak Electric's retail points. While the Chetak sells in select cities of Maharastra and Karnataka, it is yet not on sale in the key metro cities such as Delhi, Mumbai, Chennai or Hyderabad. What's not to forget is that Bajaj Auto has announced in the past that it aims to add 22 Indian cities to the list of the retail touchpoints of Chetak Electric by 2022.

The TVS' iQube also has very limited availability as of now in India. It only retails in the key Indian cities such as Bangalore, Delhi, Chennai, Coimbatore, Pune, among others, but the Apache RTR maker has promised to expand the presence of the iQube electric scooter in several new locations soon.

(Also Read: Anand Mahindra is all praise on Ola Electric for its electric scooter project)

Here's a detailed list of availability of some of India's top electric scooters as of July 2021: