47 NSG commandos will cover the length and breadth of India in 15 Tata Harrier SUVs. The rally commemorates the 75th anniversary of India’s independence.
By : HT Auto Desk
| Updated on: 02 Oct 2021, 05:20 PM 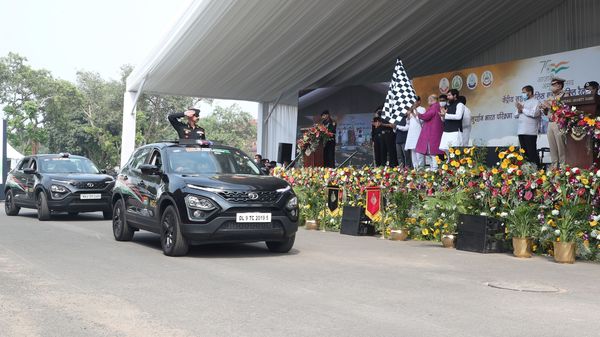 The landmark rally was flagged off by Amit Shah, Minister of Home Affairs, Government of India.

On the occasion of ‘Gandhi Jayanti’, an elite group of 47 National Security Guard (NSG) commandos started the ‘Sudarshan Bharat Parikrama’ rally in 15 Tata #Dark Harrier SUVs. The rally commemorates the 75th anniversary of India’s independence, as per a press note shared by Tata Motors.

The #Dark Harrier's ‘tough and rugged’ looks resonate with the edgy personas of the black cat commandos, says Tata Motors. And the company is proud to be the NSG’s vehicle of choice in this expedition.

The landmark rally was flagged off by Amit Shah, Minister of Home Affairs, Government of India. The convoy will be driven through 18 prominent cities and covering a distance of 7500 km, in less than a month.

Tata Motors has recently announced the launch of XTA+ variants for its Harrier SUV. The XTA+ variant of the SUV comes with 6-speed automatic gearbox and a panoramic sunroof. (More details here)