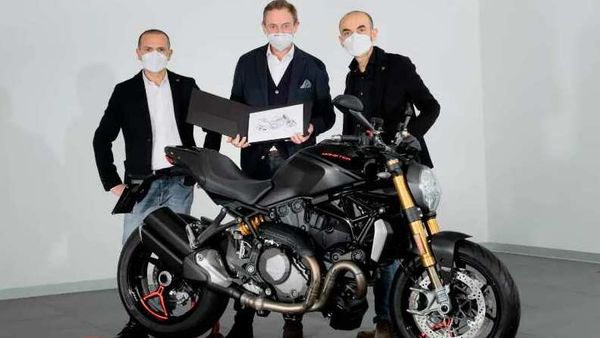 The 350,000th Ducati Monster featured a personalised 350,000 number plate and was given to the customer along with a certificate of authenticity signed by the Ducati CEO. Photo: Ducati

Ducati has recently rolled out the 350,000th unit of the highly popular naked Monster motorcycle. The 350,000th model was a Monster 1200 S 'Black on Black' motorcycle which was personally delivered to a customer in Milan, Italy by the Ducati CEO Claudio Domenicali and the Director of the Ducati Design Centre Andrea Ferraresi. The customer was specially invited to Borgo Panigale for the occasion.

The 350,000th Monster bike featured a personalised 350,000 number plate and was given to the customer along with a certificate of authenticity signed by the Ducati CEO and a sketch of the Monster bearing signature of the designer Angelo Amato.

Monster is one of the most famous street naked bikes which sell in the premium segment. Ducati came up with the first Monster bike in 1992 with the M900 and since then the bike has created a cult following which is strong even after decades of its first introduction. The original Monster featured a superbike chassis stripped off the fairings, round front headlamp and trellis frame which became a signature design element on the Monster.

Only last year, Ducati introduced the most advanced iteration in its Monster family - Monster 2021. The same bike is also expected to make its presence felt in India later this year.

Goes without saying, Moster has come a long way since its inception. Over the years, it has evolved into a much more powerful, technically advanced yet very sophisticated version of itself. For 2021, Ducati has also done away with its signature trellis frame, and instead opted for an Aluminium frame which is supposed to be significantly lighter and thus improve its overall rideability and maneuverability. In comparison to the Monster 821, the new bike is close to 18 kilos lighter. (More details here)