Kawasaki Ninja ZX-25R is slated to go on sale in the Japanese market in February, while its India debut is highly unlikely.The new Twilight Red paint scheme makes the Ninja ZX-25R look more in line with the bigger Ninja bikes from Kawasaki.
By : HT Auto Desk
| Updated on: 18 Jan 2022, 12:51 PM 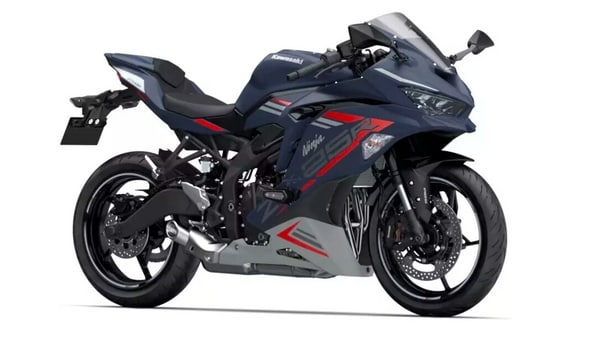 The new paint scheme makes the Ninja ZX-25R look more in line with the bigger Ninja bikes from Kawasaki.

Kawasaki has revealed the new 2022 Ninja ZX-25R for the international market. The motorcycle has received new colours options as part of the latest update. The company has added a new Twilight Blue colour option as part of the model year update. The new Twilight Blue colour comes with red and white highlights with grey logos on the fairing. Apart from the addition of the new paint option, the motorcycle remains more or less the same.

The motorcycle continues to source power from the same 249cc, inline-four cylinder engine that has been rated to deliver 45bhp of maximum power. For the record, it is also one of the most powerful quarter-litre motorcycles on sale in the world as of now. The company has also provided an option of RAM air intake which increases the power output to a total of 51 PS. The engine comes mated to a six-speed gearbox with assist and slipper clutch.

Some of the key features of the new Ninja ZX-25R include traction control, a quickshifter, two power modes, a USB charging port, and full-LED lighting for the headlamp and tail lamp.

The suspension kit includes 37 mm Showa SFF-BP fork and a rear monoshock and the braking duties are performed by a single 310 mm front disc with a radially mounted monobloc caliper and a 220 mm disc that sits at the rear-end.

It is slated to go on sale in the Japanese market in February, while its India debut is highly unlikely.