The new TVS Apache RR310 BTO is being offered with two pre-defined kits, namely, the Dynamic kit and Race kit.Apart from the introduction of the new kits, the Apache RR310 now comes with a special Race Replica graphic.
By : Prashant Singh
| Updated on: 03 Sep 2021, 14:06 PM 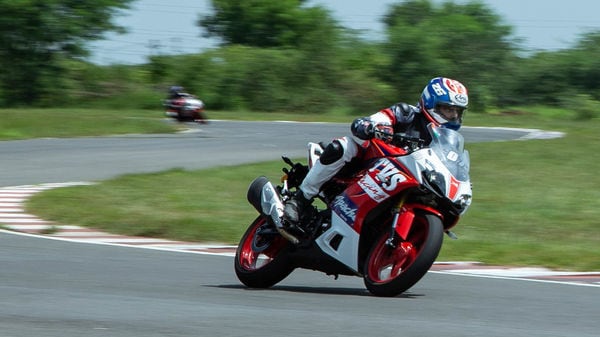 The Apache RR310 has been leading the charge for TVS Motor Company in terms of technology and performance ever since its introduction in 2017. TVS' contender in the sub-400cc segment space has already proven its mettle over the last few years, but for 2021 the company had something fairly unique in mind. It announced the launch of its BTO (Built to Order) and the Apache RR310 became the first product to be introduced on this platform. I flew to Chennai earlier this week to test the updated sports bike (on a race track) and here's what I found.

What all has changed?

With the latest update, the bike is now being offered with two pre-defined kits, namely, Dynamic kit and Race kit. With the Dynamic kit, the customers get fully adjustable front and rear suspension with multi-level adjustment of preload, rebound and compression damping. The Race kit opens doors for sportier ergonomics for hardcore race enthusiasts with a more aggressively placed handlebar, rear set raised footrest and knurled footpegs. In addition, the kit also gets an anti-rust brass coated drive chain. These kits can also be retrofitted on existing bikes too.

Apart from the introduction of the new kits, the sports bike now comes with a special ‘Race Replica’ graphic that is said to have taken inspiration from the TVS Racing OMC race machines. While there are new graphics to woo the race enthusiast, the overall design of the bike has remained unchanged.

For 2021, the bike's 5.0-inch TFT connected display has been tweaked with new features including ‘Digidocs’ that gives the user an option to store documents like licenses, RC cards on the cluster via the TVS Connect app. In addition to that, the cluster displays a dynamic engine rev limit indicator, day trip meter, over speed indication, and much more.

For the record, this display already comes with some tab-worthy informatics such as ride statistics, motorcycle status data, navigation assists, and the ability to make and receive phone calls as well.

Is the adjustable suspension worth it?

For starters, the new Apache RR310 is probably the only bike in its segment (or above) that comes with a fully adjustable suspension setup. This means that you can completely alter the ride behaviour and feedback from the suspension depending upon how you want the suspension to behave.

The new Apache RR310 is the only bike in its segment or above that comes with a fully adjustable suspension setup. (HT Auto)

At standard setup (which you would prefer for daily/city/highway rides) the suspension remains soft to soak in the undulations our roads have to throw at it, but it makes the bike feel like a ping pong ball under harsh braking on a race track. Step on to the stiffer settings, and the suspension completely changes its behaviour for you to push the bike tad more around the corners. Also, late and harsh braking will go unpunished as the suspension clearly maintains the composure and doesn't let the front end dive or the rear wheel hop. And it's a sign that you have a capable race machine in hand.

The monoshock at the rear of the Apache RR310 BTO comes with a 20-step rebound damping and a 10-step preload adjuster. (HT Auto)

Throw the Apache RR310 around a corner and it manages to impress with the planted feel it offers. My overexcited nerves had me overshoot the corners a few times but the bike was forgiving enough to not eject me from the saddle for abusing the lines and causing a ruckus. Mid corner lane corrections are possible if you can keep the throttle under control because the engine keeps brimming with torque throughout the mid-range and that's what allows the bike to shoot around corners with high velocities.

I was able to enter the C1 on the MMRT with triple digits flashing on the dash, and almost maintain it throughout the curve before hitting the brakes for the sharp right-hander. Also, what's worth mentioning is that side to side transition on the RR are also not only quick but also stable even for someone like me that is on a heavier side of the scale. You can really keep the throttle pinned while going from side to side on the T4/T5/T6 junction on the track and that was a pretty good feeling. 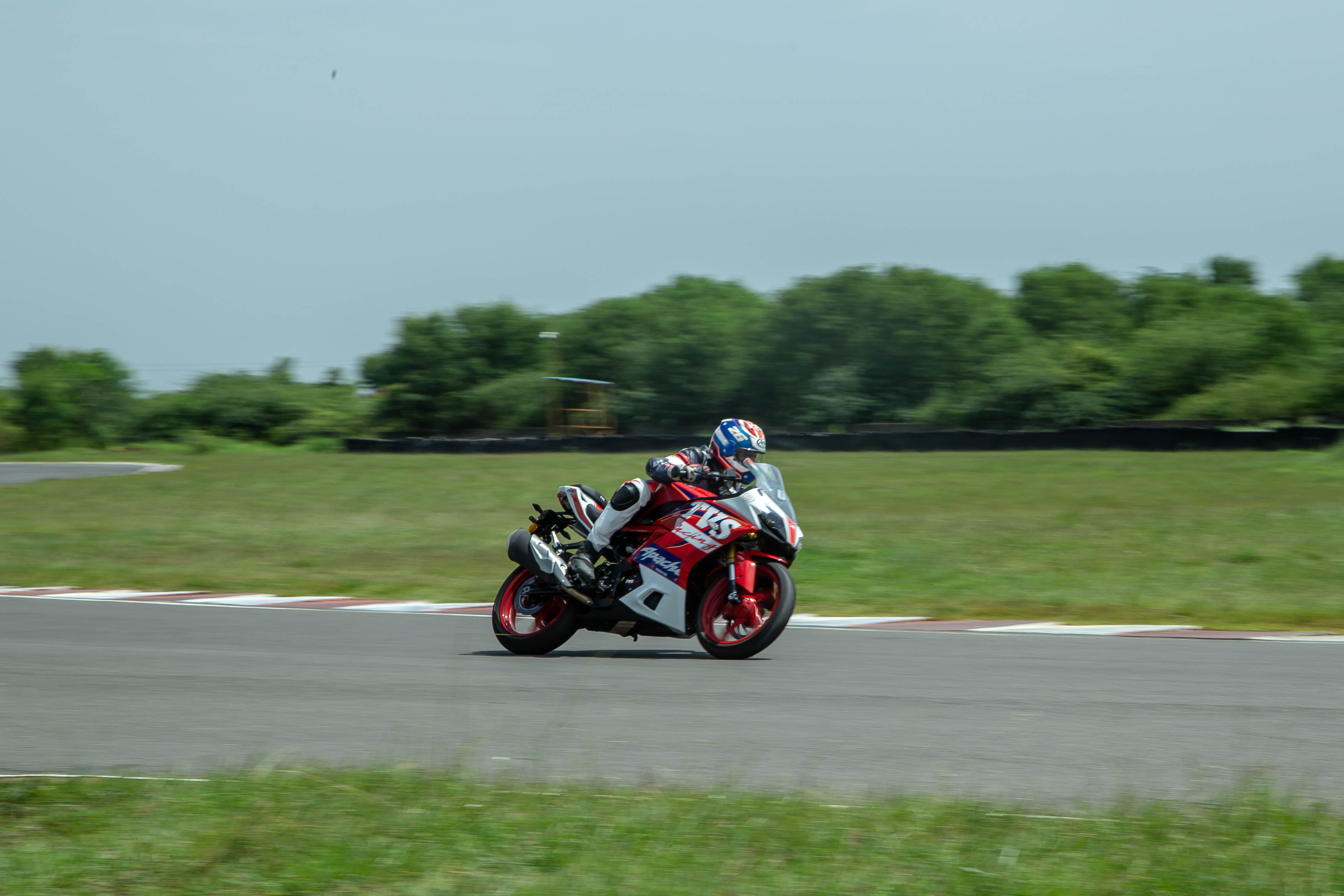 Throw the Apache RR310 around a corner and it manages to impress with the planted feel it offers. Also, the updated bike gets an improved lean angle.  (HT Auto)

TVS' race expertise really reflect on the Apache RR310 which make it a guided missile on a race track. There's simply nothing that feels lacking on the RR310 for a circuit that's big enough as the MMRT. All the updates seem to be working well for the bike and it really brings a lot to the table when it comes to the customers that are interested in customised performance updates.