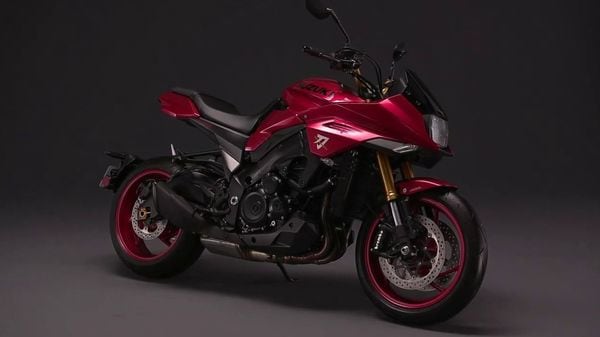 Suzuki Katana has received a new special edition cherry red colour option in Japan. With the new addition, the bike is now available in a total of three colours including the previous Mystic Silver Metallic and Glass Sparkle Black options.

The new cherry red paint scheme makes the Katana look more intimidating as its alloy wheels come dipped in red and the handle-bar features a shade of gold. The same shade is also seen on its front fully-adjustable KYB 43 mm USD forks. Moreover, it also gets red stitching on the dual-tone single-piece seat which further ups the ante in terms of its overall looks and appeal.

(Also Read: Bikes to be discontinued in India after BS 6 transition)

All these changes make the Katana stand out, especially when compared to the already available paint schemes.

Apart from these cosmetic tweaks, the motorcycle remains the same. It sports a very unconventional design which is a tribute to the original Katana sport-touring motorcycle which was produced from 1981 to 2006. The new-gen Katana was revealed to the world at the 2018 INTERMOT motorcycle show in its production-ready form.

In terms of exterior design and styling, it gets a full-LED square headlamp with LED DRLs which come tagged on its semi-fairing. The sharp character-lines running across the length make things interesting and that along with it semi-cut tail-end makes it look highly intriguing.

The bike also features a fully digital instrument cluster which is good enough to show all the necessary details in a simple and readable format.

As far as pricing is concerned the Suzuki Katana has been priced at JPY 1,400,000 ( ₹9.78 lakh) for the regular Mystic Silver Metallic and Glass Sparkle Black colour options. The price of the new cherry red special edition isn't known at the moment.

Though not confirmed officially, but the Katana might enter the Indian motorcycle market in by 2021