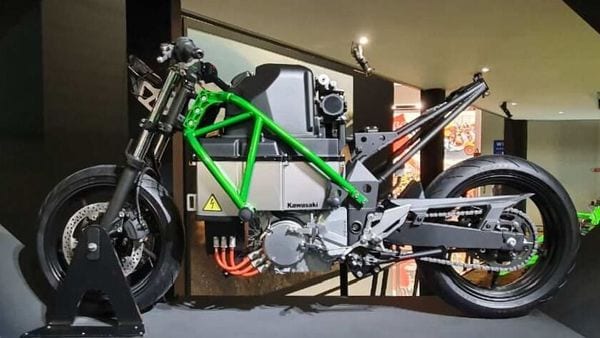 Kawasaki developing an electric bike isn't news and now the Japanese auto maker has launched a series of teaser videos on its YouTube channel, revealing details on its latest project.

As per the new teasers, Kawasaki's first EV may be named 'Endeavor'. Moreover, unlike other electric bikes seen till date, it would actually employ a 4-speed manual transmission.

For the uninitiated, the company did roll-out an EV concept equipped with a 4-speed manual transmission at the last year's EICMA 2019 and the new teaser confirms that the same design will actually go into production now.

As per Kawasaki, “manual transmission not only allows a greater speed range, it also allows the rider to have greater input when operating the bike."

The company is yet to reveal the technical specifications of the EV but as per some reports it would churn out power equivalent to sub 30 PS from its electric motor. While the official weight figures still remain under covers, the company claims that the bike will be "light, fun, and responsive."

As far as exterior design and structure is concerned, the EV is currently being tested under the Ninja 300 bodywork, but as it reaches the completion stage, needless to say, a new design will likely be introduced.

The bike will be company's first offering in the EV space and will mark the beginning of the EV warfare among the Japanese rivals (Yamaha, Honda, and Suzuki).

While brands like Harley-Davidson and Zero Motorcycles have produced only high-end electric bikes, Kawasaki's approach is quite contrary.

It is suspected that the 'Endeavor' will be an entry-level electric sport bike with just about adequate performance. It will appeal to a much wider set of audience, and thus might also be expected to arrive in developing markets such as India.