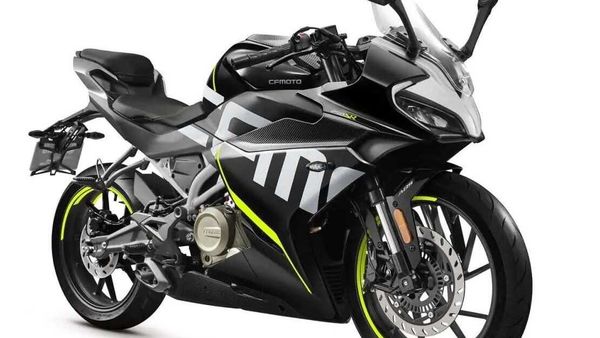 The 250SR is the fully-faired sibling of the quarter-litre naked CFMoto 250NK bike. The latter is already on sale in the Southeast Asian country.

On the outside, it is an exact replica of the CFMoto 300SR which is expected to be launched in the Indian market by end-2020. It features a very emotive front fascia courtesy of the sharp dual LED headlamps. Moreover, its sculpted fairing and high-raised tail-end lends it a very intimidating appeal.

It gets a fully-digital instrument console with auto-brightness feature for ambient lighting conditions. The screen can be used to select riding modes - Sports and Eco. Selecting the modes also differs the layout of the instrument panel. It also includes smartphone connectivity.

As for the mechanicals, the 2020 CFMoto 250SR packs a 249.2 cc, single-cylinder, liquid-cooled powertrain which produces a maximum power of 28 PS at 9,750 rpm and a peak torque of 22 Nm at 7,500 rpm. The engine features electronic fuel injection by Bosch and comes paired to a 6-speed gearbox. The company claims that it has also added a balance shaft which helps limiting the overall engine vibrations.

Its hardware kit includes 37 mm USD front forks and a monoshock at the rear with preload adjustability. Its braking duties are handled by a single 292 mm front disc with four-piston caliper and 220 mm rear disc. It also gets a dual-channel ABS from Continental.

CFMoto 250SR rivals the likes of Suzuki Gixxer SF 250 and the KTM RC 200. When launched in India, expect the bike to cost around ₹3 lakh.