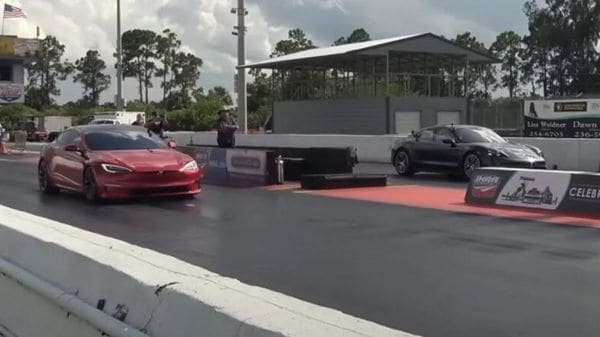 A Tesla Model S Plaid was pitted against a Porsche Taycan Turbo S in a drag racing event.

With the Tesla sedan being delivered to the customers several videos of the car are surfacing online. The updated Tesla Model S Plaid with its triple-motor system onboard took the challenge of drag racing with the Porsche Taycan Turbo S.

So what happened in the drag race? In the first race, the Tesla driver outpaced the Porsche and sprinted down a quarter-mile distance in just 9.67 seconds at a top speed of 242.9 kmph. The Porsche Taycan Turbo S was slower to cover the same distance in 10.422 seconds.

In the second race too, Tesla took away the show. It completed the quarter-mile drag race in 9.3444 seconds at 243.6 kmph top speed. The Porsche on the other hand was more than a second slower than its rival. Clearly, it was an interesting event to watch, where two rivals from both sides of the Atlantic were competing with each other.

Last week we saw a tuned Ford Mustang Shelby GT500 was pitted against a Tesla Model S Plaid. It was a high-performance electric sedan against a growling ICE-powered beast. But, this time, it was an all-electric affair.

The Ford Mustang Shelby GT500 used last week was capable of churning out 1,100 hp of power output. It was way more than 760 hp delivered by the stock 5.2-litre supercharged V8 engine of standard Mustang Shelby GT500. The Mustang won both the races against Tesla Model S Plaid by a marginal edge.