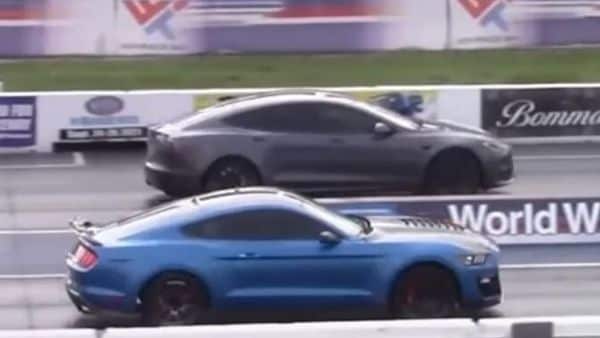 Tesla claims the newly introduced Model S Plaid is the quickest production car in the world at present. Sure, the electric sedan is capable of beating any stock car in the world. But, can it beat a tuned high-performance model?

A tuned Ford Mustang Shelby GT500 was pitted against a Tesla Model S Plaid. The video of this track test has surfaced online.

The video features a modified Shelby GT500 that is capable of churning out 1,100 hp of power output. This is way above the 760 hp delivered by the stock 5.2-litre supercharged V8 engine of Mustang Shelby GT500.

The Tesla Model S Plaid on the other hand comes with three electric motors. The electric sedan is capable of hitting 96 kmph from a standstill position in less than 2 seconds. As Tesla claims, the EV can munch down a quarter-mile distance in 9.2 seconds.

Who do you guess won the race between these two fast and furious machines? While both of them were very close with each other with the figures, the Shelby GT500 took away the show with a slight edge. It was probably impossible with stock cars, but the modification of Ford Mustang Shelby did the trick.

There was a second race as well, where numbers were close to the first one. The Mustang covered the distance in 7.66 seconds at 259.01 kmph speed, while Model AS Plaid covered the same in 7.68 seconds at 249.75 kmph.