Polestar 3 will be the third model from the Volvo and Geely subsidiary and will be built in the US. It is likely to be slightly larger in size compared to the Volvo XC40 Recharge.
By : HT Auto Desk
| Updated on: 04 Dec 2021, 14:09 PM 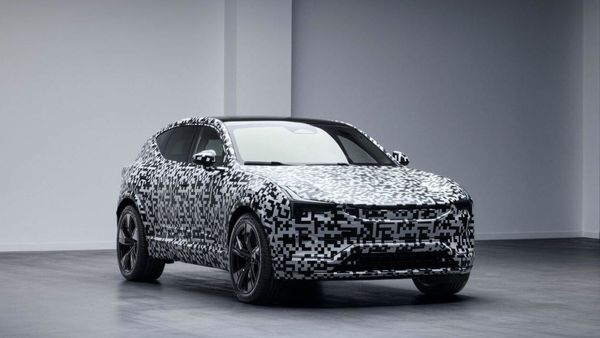 Volvo has teased the upcoming Polestar 3 electric SUV ahead of its possible launch next year.

The third model from Polestar, the EV brand under Volvo Cars, is all set to make debut next year. The Polestar 3 electric SUV was teased wrapped in a camouflage recently ahead of its global debut.

The company said that Polestar 3 will be manufactured at the EV-maker's state-of-the-art facility in Charleston, United States and will be the first model from the Swedish brand to be produced in North America. Polestar 3 will be the third model from the Volvo and Geely subsidiary and will be built in the US. It is likely to be slightly larger in size compared to the Volvo XC40 Recharge.

“We will build for Americans in America," says Thomas Ingenlath, CEO of Polestar. “Polestar 3 should come onto the market in 2022 and, as a premium electric performance SUV, define the design of SUVs in the electric age. It will also be the first Polestar vehicle to be built in the USA."

When launched, it will take on rivals like the Tesla Model Y, Audi e-tron, Mercedes-Benz EQC and even the upcoming BMW iX, which is set to debut in India this month.

The teaser image shared by Polestar of its upcoming electric SUV shows the Polestar 3 covered with camouflage with a slim T-shaped LED headlights. Despite the camouflage, it is clear that this SUV will have a sporty look with a lowered roof line. The rear bumper is reminiscent of the Volvo XC40.

The brand claims that the Polestar 3 will be one of the most climate-friendly cars of all time. Equipped with LiDAR sensor from Luminar and central NVIDIA computing power, it will enable autonomous driving on the highway.

Polestar 3 will be launched in the market closer to the debut of the third generation Volvo XC90 and will borrow a number of parts from it. The Polestar 3 electric SUV is expected to be more compact compared to the XC90.

The brand's plans are very ambitious and it plans to launch a new model every year for the next three years and increase its presence in at least 30 markets by the end of 2023. “We're not a virtual company waiting to build factories and sell cars. We are a real company that already produces and markets cars all over the world. Our two award-winning vehicles are on the roads of 14 markets around the world and we expect to sell around 29,000 vehicles this year," said Thomas Ingenlath.