Volkswagen Virtus, rival to Skoda Slavia, to debut tomorrow: What to expect

Volkswagen Virtus will share a lot of similarities with the recently launched Skoda Slavia mid-size sedan. The two will share the same platform, engines and some other features.
By : HT Auto Desk
| Updated on: 07 Mar 2022, 11:17 AM 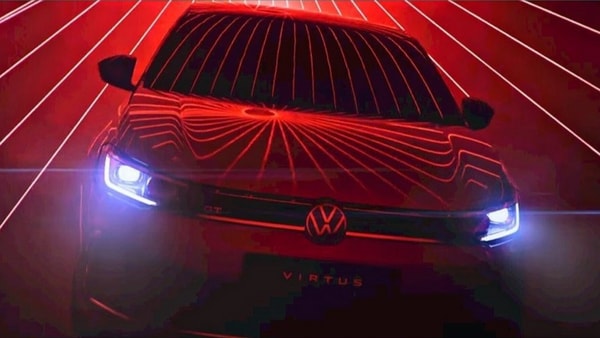 Volkswagen Virtus mid-size sedan, which will rival Skoda Slavia among other cars in the segment, will be officially unveiled on March 8.

2022 Volkswagen Virtus is all set to be the second new model to be introduced in India in the mid-size sedan segment. The German carmaker will officially take the covers off the 2022 Virtus sedan tomorrow, March 8. The sedan is Volkswagen's first major offering to Indian customers this year. Virtus will replace Volkswagen Vento from its lineup when launched. Here are some of the things we already know about the upcoming new sedan.

Volkswagen Virtus will share a lot of similarities with the recently launched Skoda Slavia mid-size sedan. The two will share the same platform, engines and some other features.

Virtus will be based on the same MQB A0 IN platform that underpins the Skoda Slavia. The newly-launched Slavia stands 4,541mm in length, 1,752mm in width, 1,487mm in height and has a wheelbase of 2,651 mm. Expect the Volkswagen Virtus to have similar dimensions.

AS far as the looks are concerned, teaser images of the 2022 Virtus confirms that the sedan will have fresh styling elements compared to the outgoing Vento model. The Virtus will come with a two-slat grille, twin projector headlamps and LED DRLs.

The teaser has also given away that the Virtus will have a GT variant too, just like the Taigun SUV. The Virtus is likely to be offered with two engine options, both of which are used in the Skoda Slavia. While the 1.0-litre TSI will be offered on base variants, the more powerful and peppy 1.5-litre TSI is likely to come with the GT badging.

Expect the 2022 Volkswagen Virtus to be packed with several features, just like its technical cousin Slavia. The Virtus may be offered with a 10-inch touchscreen, a digital instrument cluster, wireless charger, sunroof and connected car tech. As far as safety is concerned, expect the Virtus to be come with six airbags as standard besides other safety features like tyre pressure monitoring system, ABS, EBD and ESC.

When launched, 2022 Volkswagen Virtus will take on rivals in the mid-size sedan segment like Honda City, Maruti Suzuki Ciaz, Hyundai Verna besides the Skoda Slavia.