Skoda Slavia mid-size sedan was earlier announced by the Czech carmaker this month. It is expected to launch by the end of this year and is perceived to be a replacement for the Rapid.
By : HT Auto Desk
| Written By : Sabyasachi Dasgupta
| Updated on: 11 Oct 2021, 03:38 PM 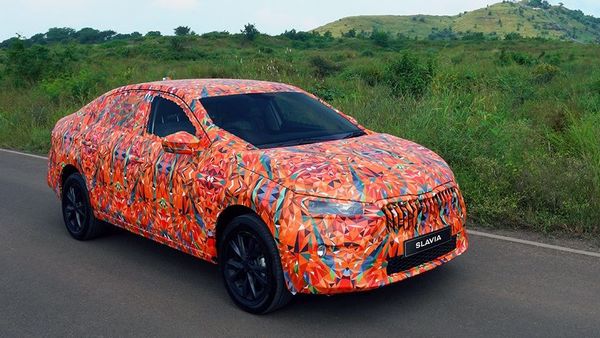 Skoda has teased the upcoming Slavia mid-size sedan and offered a first glimpse at the car, albeit wrapped in a camouflage. The Czech carmaker released an image of the car in orange wraparound camouflage, testing on Indian roads ahead of its possible launch later this year.

Skoda recently confirmed the name of the upcoming sedan. The 2021 Slavia is being seen as a successor to Skoda's popular Rapid sedan. Earlier this year, Skoda had confirmed that it will not launch anymore facelift models of Rapid sedan in India. However, Slavia will be more premium than the Rapid models.

Skoda will introduce Slavia in India before anywhere else in the world. Zac Hollis, Director of Skoda Auto India, had hinted that the new sedan is likely to be launched some time later this year.

(Also read: After Kushaq and Taigun, Skoda and Volkswagen to renew rivalry in sedan segment)

The sedan is going to share the same MQB-A0-IN platform which underpins the recently launched Kushaq SUV. Skoda Slavia may get the same 1.5-litre turbocharged petrol engine that powers Kushaq, mated to either a six-speed manual or a six-speed automatic gearbox.

Slavia will be Skoda's third model to be introduced in India this year. After Kushaq's launch last summer, Skoda recently launched the fourth generation Octavia sedan. Octavia will continue to be Skoda's flagship model in the sedan segment, with the Slavia playing a second fiddle for the Czech carmaker in India.

When launched, Skoda Slavia will take on rivals like the Maruti Suzuki Ciaz, Honda City and Hyundai Verna among the premium mid-size sedans. It will also lock horns with the upcoming Volkswagen sedan for India.

ŠKODA AUTO India reveals the first glimpse of its upcoming premium mid-sized sedan #SKODASLAVIA with the winning design from the #CamoWithSKODA contest by Shreyas Karambelkar. pic.twitter.com/hw9esWsU63

Slavia's entry to India comes after Rapid's decent run for a decade came to an end. Skoda had launched the Rapid in India back in November 2011. It had received a facelift in 2017 and was upgraded later with a BS 6 engine when stricter emission norms kicked in.

The existing models of Rapid is powered by a 1.0-litre turbocharged petrol engine which is capable of producing 110PS of maximum power and a peak torque of 175Nm.