Mercedes-Benz to introduce Level 3 autonomous driving technology in US 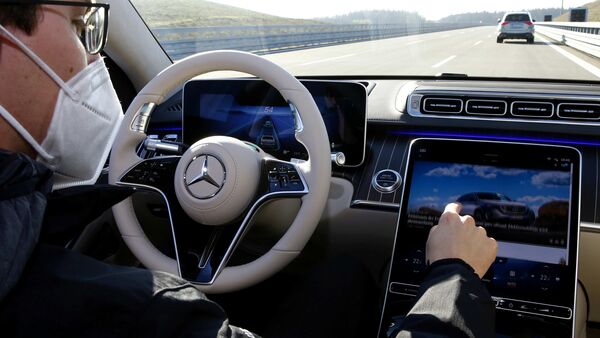 An employee of Daimler demonstrates steering by the Drive Pilot Level 3 autonomous driving system in a new Mercedes-Benz S-Class limousine.

Mercedes-Benz is one of the leading car brands in the world when it comes to introducing new technologies. The German luxury car brand is now gearing up to introduce its Level 3 autonomous driving technology Drive Pilot in US-bound cars. The carmaker has already started testing the beta version of the technology, claims a report by Electrek. As it hints, the EQS and S-Class will get the software and compatible hardware.

The Mercedes-Benz Drive Pilot builds on the surrounding sensors of the Driving Assistance Package and comprises additional sensors, which the OEM considers indispensable for safe conditionally automated driving. It gets a 4-GPS antenna setup that directly pulls data from satellites. The other hardware includes LiDAR, a camera in the rear window and microphones, especially for blue lights and other signals from emergency vehicles. The car also gets a moisture sensor in the wheel well.

The Drive Pilot also comes with supplemental steering and braking systems and a supplemental onboard electrical system as well. These systems ensure that the car remains manoeuvrable even if one of these systems fails and enables safe handover to the driver.