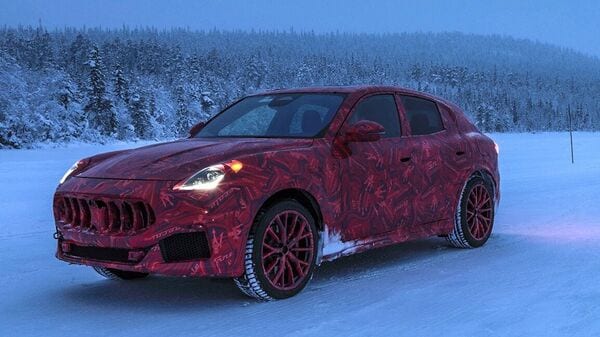 Maserati Grecale comes as the second SUV of the luxury car brand after Levante.

(Also Read: Maserati Grecale looks like a growling beast, slated to be unleashed on March 22)

The automaker has grabbed pretty good attention with its MC20 super sports car, which is priced at around $222,000. It has bolstered Maserati's presence in the high-end automobile market. The carmaker is now readying its all-new luxury SUV Grecale, slated for unveiling on March 22. Upon launch, this SUV will be the second one from the brand after Levante. Also, Maserati Grecale will be positioned below the Levante SUV in its portfolio. The Maserati Grecale will go on sale later this year in European markets and after that in the US as well.

Apart from that, Maserati is also considering launching full-electric variants of all its cars, which will come bearing the Folgore badge. The MC210 and all other cars will get the electric variants by 2025. Also, Maserati aims to go fully electric by 2030.

The carmaker has revealed that its first battery-electric vehicle (BEV) will be the new GranTurismo, which will debut in 2023. Apart from that, Grecale too will enter the EV arena in 2024.

Speaking about the upcoming models, Grasso said that they will be based on a Maserati architecture initially. However, at a later stage, it would start using a common platform that would underpin several other models from Stellantis Group vehicles. He said that the company aims to pursue some uniqueness for Maserati and its high-performance footprint.