Maruti Suzuki formally signed a deal today with the Haryana government to set up its third manufacturing facility in the state. Maruti will invest ₹11,000 crore and aim to produce 2.5 lakh cars when production starts from 2025.
By : HT Auto Desk
| Updated on: 19 May 2022, 02:39 PM 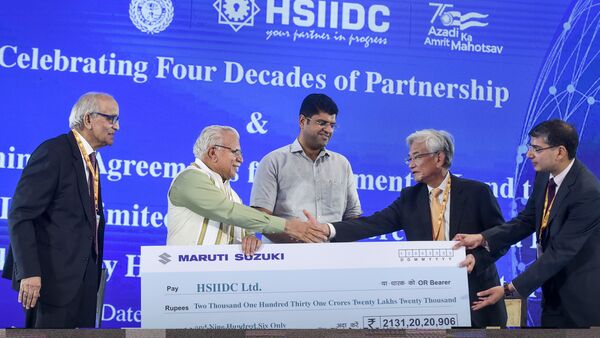 Maruti Suzuki has officially signed a deal with the Haryana state government, which formally allotted land to India's largest carmaker to set up its third manufacturing facility in the state. The plant, located in Sonipat district of the state, will produce cars by Maruti Suzuki as well as two-wheelers from Suzuki Motorcycle India. This facility is expected to start production from 2025. Maruti currently manufactures its cars from its two facilities in Manesar and Gurugram in Haryana.

The new facility will be set up in an area spreading across 800 acres. It is located at the Industrial Model Township, Kharkhoda. Maruti Suzuki will invest ₹11,000 crore in the first phase to set up the plant, The carmaker is expected to begin manufacturing from the Sonipat plant in 2025 and expects to produce around 2.5 lakh cars annually in the initial phase. The facility is also expected to create jobs for more than 13,000 people.

Currently, Maruti Suzuki has an overall production capacity of around 22 lakh units every year across its two manufacturing plants in Haryana and Suzuki's facility in Gujarat. At present, Maruti rolls out around 15.5 lakh units from its two key facilities at Gurugram and Manesar.

"Today, we sign the agreements with the Haryana government for allotment of 800-acre land to Maruti Suzuki and 100-acre land to Suzuki Motorcycle India Private Limited. Maruti Suzuki will start construction work on the car manufacturing plant immediately," Ayukawa added.

The OEM manufactures several hot-selling models like WagonR, Swift, Alto, Eeco and Celerio in the small-vehicle category. It also has a sizeable share in the utility vehicle space with Vitara Brezza, Ertiga and XL6 faring well.