Mahindra Thar SUV secured an impressive four-star rating during a crash test by Global NCAP on Wednesday.
By : HT Auto Desk
| Updated on: 26 Nov 2020, 11:14 AM 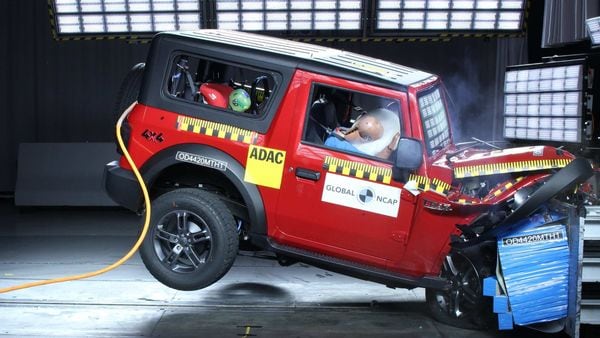 Mahindra Thar SUV has restructured the list of top 10 safest cars in India with its impressive crash test at the Global NCAP on Wednesday. Thar SUV now stands at number four on the list with a four-star rating.

2020 Thar SUV is now the third vehicle from the Mahindra stable, after XUV300 SUV and Marazzo MPV, to feature in the list safest cars in India. In fact, Mahindra now has two vehicles, Thar and XUV300 SUVs, among the top five safest cars on Indian roads. The 2020 Thar can now also be officially called the safest Indian off-roader too.

Mahindra Thar SUV was launched earlier in October 2 in a brand new avatar of the iconic off-roader it has been for a while. It retained its adventure DNA with a cloak of an urban-styled SUV and a lot more creature comfort to lure more than just adventurists or enthusiasts. However, with the recent Global NCAP reports now out, it has also checked another box that may help to further bolster its position as a lifestyle SUV.

Mahindra's XUV300 SUV sits right on top of the list of safest cars in India with five-star rating. In fact, in a recent report, Global NCAP crowned it as the safest car in India since 2014. Global NCAP's safety ratings for cars on Indian roads so far has covered more than 40 vehicles in the past six years. Another Mahindra offering, the Marazzo MPV, sits at number eight on the list after it managed a four-star rating.

Tata Motors, with its Altroz, Nexon, Tigor and Tiago offerings, occupy the rest of the slots in top six on the list. Tata Altroz and Nexon also managed five-star ratings at the Global NCAP. Tata Motors has been quite active on social media recently, taking potshots at some of its rivals who faired poorly at the Global NCAP crash tests. Maruti Suzuki was particularly on the receiving end after its S-Presso returned with poor figures in the crash test.

However, the Vitara Brezza SUV, one of Maruti's top-sellers, complete the list of top 10 safest cars for India at number 10. The SUV also featured in the previous list of 10 safest cars too.

The other two cars on the list are Volkswagen Polo and Toyota Etios.