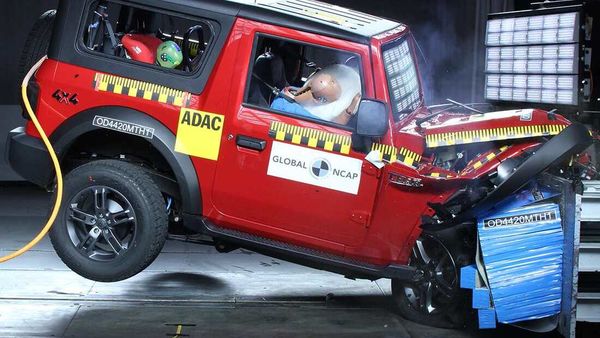 The structure of the Thar SUV was rated as stable but the footwell area was rated as unstable. Both adult knee areas were optimized to reduce significant injuries. Also, the child dummy occupants received almost full protection during the test.

Side impact UN95 test was also performed on the Mahindra Thar and it passed it comfortably. The side impact test is mandatory to reach five stars but it was not considered in the scoring as the Thar did not reach the required points in the frontal impact to achieve a five star result.

“Mahindra’s commitment to safer cars is once again displayed for consumers and shows that it is possible to offer good safety performance in the Indian market. It is encouraging to see manufacturers that also offer high levels of protection for children traveling in their vehicles. The Thar demonstrates the capacity of Mahindra to improve its fleet safety," said Alejandro Furas, Secretary General of Global NCAP.

David Ward, President of the Towards Zero Foundation said, “Another good result for Mahindra which shows the manufacturer’s commitment to safety. It is very satisfying to see this growing vehicle safety trend in the Indian car market, which combines minimum regulatory requirements with the purchasing power of #SaferCarsforIndia informed consumers, helping to drive demand for ever safer vehicles."