Anand Mahindra was replying to one of the customers on social media who complained about long waiting period for the new Thar SUV.
By : HT Auto Desk
| Updated on: 25 Nov 2020, 11:21 AM 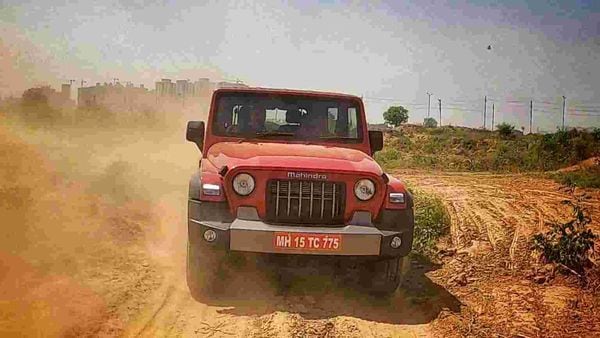 Mahindra launched the new Thar SUV at a starting price of ₹9.80 lakh on October 2.

Mahindra Thar SUV may have garnered a lot of interest among customers, but the waiting period for the new avatar of the iconic off-roader is getting longer with time. Earlier this month, HT Auto reported waiting period for Thar SUVs extended to seven months. By the end of the month, it seems to have extended further to nine months.

Recently, one of the customers who has booked a Thar SUV, raised the issue on social media. He said that it is a disappointment to wait so long for an SUV that has already been booked.

The user also asked Mahindra Group chairman Anand Mahindra whether production of Thar SUVs can be increased to meet the demand. Mahindra replied, “Working round the clock to raise output."

Working round the clock to raise output... https://t.co/YkDHTtYWnG

In little over a month since its launch on October 2, Mahindra received over 20,000 bookings for Thar 2020, making it one of the most successful launches of the year and product from the car maker.

"We are overwhelmed with this unprecedented response that the all-new Thar has garnered. I must admit the response has surpassed all our expectations and production capacities," M&M Automotive Division Chief Executive Officer Veejay Nakra had said.

Mahindra had also promised that the process of delivering as many as 500 units of Thar 2020 to customers have already begun and probably completed by the Diwali weekend.

The bulk of the demand is coming in for the LX variant of Thar 2020 with many preferring the petrol automatic. The SUV is also available with a diesel engine and with manual transmission. That it remains a capable off-roader does play to its strength but the new Thar has now also become an attractive proposition for the lifestyle buyer who may put it through its paces within city limits on a daily basis. As such, the plethora of options, a long list of features and stylish looks all combine to make this vehicle stand out.

The second-generation Thar is pinned on a completely new ladder-frame chassis and gets soft-top, hard-top and convertible rooftop as options.