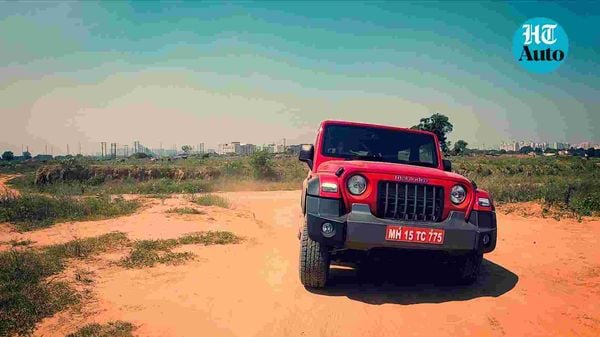 Mahindra Thar 2020 SUV is continuing its trend of setting the bookings chart on fire since it was officially launched on October 2. In the little over a month, Mahindra and Mahindra has received over 20,000 bookings for Thar 2020, making it one of the most successful launches of the year and product from the car maker.

(Also read: Thar No. 1 at ₹1.11 cr, in Mystic Copper shade, handed over to auction winner)

Such has been the response for the new Thar that Mahindra and Mahindra informed in a press statement issued on Wednesday that the waiting period for it now ranges between five and seven months, depending on variants. The company further claims that it has put in place a robust customer connect process which will keep buyers updated about the waiting period and that it plans to deliver 500 uniu

This has also prompted the Indian car maker to ramp up production capability at its Nasik facility and from the supplier end to meet the surge in demand and bring down the waiting period for customers. "We are overwhelmed with this unprecedented response that the all-new Thar has garnered. I must admit the response has surpassed all our expectations and production capacities," M&M Automotive Division Chief Executive Officer Veejay Nakra said.

Nakra further added that it was initially planned to roll out 2,000 units of Thar from the plant but this figure will be hiked to 3,000 by January. "This would help us bring down the waiting period to a reasonable timeline," he informed.

One of the main reason for the new Thar faring this well in the automotive market is that while it remains a fully-capable 4x4 vehicle, it now also appeals to the lifestyle buyer who may want to put it to use as a daily commute option within city limits. This is thanks to a plethora of options, ranging from petrol to diesel - 2.0-litre mStallion petrol engine or 2.2-litre mHawk diesel engine, manual transmission to automatic gearbox, soft-top, hard-top and convertible rooftop, as well as new-age features like infotainment screen, cruise control, roof-mounted speakers (on the hard-top version)m steering-mounted controls and splashproof switches.

The second-generation Thar is pinned on a completely new ladder-frame chassis.

While the car was launched on October 2 and this is also when bookings began, deliveries to customers started from November 1. The company had previously informed that a majority of customers are first-time buyers and most are opting for the LX trim and for the automatic transmission option.