Thar No. 1 at ₹1.11 cr, in Mystic Copper shade, handed over to auction winner 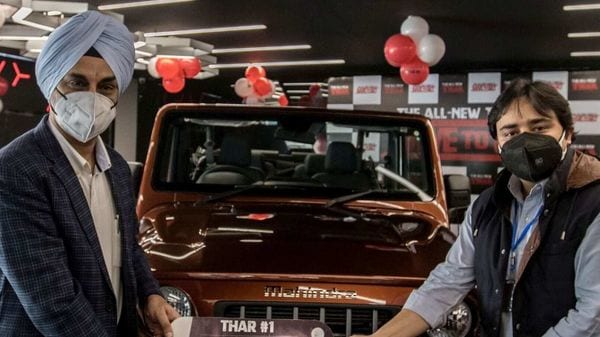 Thar No. 1 being handed over to Delhi's Aakash Minda.

The bidding for the extra exclusive first unit of Mahindra Thar 2020 was every bit as intense as it was praised for being meant for a noble cause. At the end of several days of bidding, Delhi's Aakash Minda had won the auction at ₹1.11 crore and he recently received what could well be his most prized possession ever - an LX Petrol Automatic Thar 2020.

Minda emerged the winner in the auctions by outdoing close to 5,500 bidders from 500 different locations in the country. Mahindra had said that the winning bid amount would be matched by it and the total amount would be donated for a noble cause. And while the money is being given for charity - to Swades Foundation, the exclusive No. 1 Thar has received a whole lot of attention as well.

Minda chose to have his special Thar in Mystic Copper colour from the six shades on offer on the new Thar. It is also hardly surprising that he chose the petrol auto variant because it is for the first time that an automatic transmission unit is on offer on the car. But it is the 'Thar No.1' badge on the outside as well as in the cabin that truly sets this particular car apart from all others. It also gets the owner's initials and serial number 1 on a decorative plate on the dashboard and leatherette seats.

It was indeed a special moment for Minda to have finally received the car. "I am truly excited to own this much coveted Thar #1 and contribute to a relevant cause. I would like to thank Mahindra for all the personalised touches in my Thar #1 and making it even more special," he said. "Afterall owning the Thar #1 is not just about possession but an emotion that makes it special."

Deliveries of Thar 2020 to all other customers have also now commenced. The SUV is now packed with features and a host of design upgrades, and has received a strong response from prospective buye