Mahindra states that it is increasing its capacity to roll out Thar 2020 seeing the scale of interest and bookings.Mahindra Thar 2020 in automatic variants are being preferred more.
By : HT Auto Desk
| Updated on: 19 Oct 2020, 01:54 PM 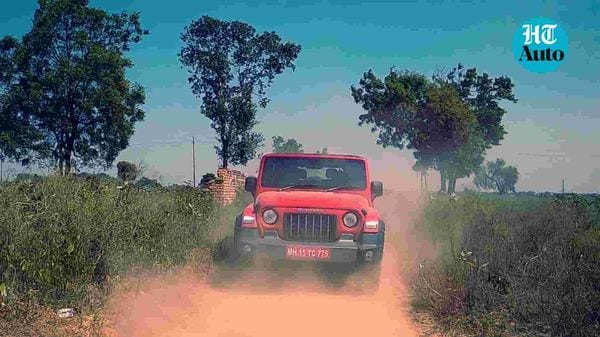 Mahindra Thar 2020 has managed to create a whole lot of buzz in the Indian auto market. (HT Photo)

Mahindra Thar 2020 has been an instant hit since it was officially launched on October 2 with the company on Monday announcing that over 15,000 units of the go-anywhere SUV has been booked so far. Thar 2020 had hit 9,000 units in bookings in the first four days of being launched.

Thar 2020 promises the same abilities to tackle a wide variety of terrain but now also promises a more premium and comfortable cabin, something that was missing from its list of attributes thus far. As such, Mahindra informs that the vehicle has managed to strike a chord with those who have never owned it before. Of the total bookings received so far, 57% customers of the new Thar are first-time buyers.

In addition, Thar in automatic variant is also being preferred more than the one with manual gearbox.

Offered in LX and AX variant with the former oriented more towards the lifestyle buyer while the other retaining the absolute authentic off-road character, Mahindra states that Thar 2020 is seeing a massive interest among people at large. The company also informs that it is lifestyle seekers who are powering this interest, over and beyond the the traditional lovers of the brand.

Mahindra informs that it is now ramping up capacity to cater to the demand for the new Thar in a timely manner.

What is also contributing to the sure-footed start for Thar in the market is - apart from the transmission options - the ability to choose between a 2.2-litre mHawk diesel engine and a 2.0-litre mStallion petrol engine. There is a hard-top, soft-top and a convertible option, and a a completely new ladder-frame chassis underpins the second-generation Thar.

That the cabin has now been equipped with features such as splash-proof infotainment screen, splash-proof AC control buttons, roof-mounted speakers - on the hard-top version, and steering-mounted controls make the Thar more appealing to someone who may want to put the Thar through its paces within city limits.

Mahindra recently also rolled out a long list of accessories and merchandise for the Thar and the owner. (Read full report here)

The idea behind offering these accessories and merchandise, says Mahindra, is to ensure that no two Thar vehicles are exactly alike while the owner himself - or herself - is also able to have practical equipment made for Indian conditions and climate.

All of these have not only contributed to the buzz around Thar and its bookings but has also helped Mahindra and Mahindra share price rise.