Lexus has unveiled its first ever fully-electric SUV RZ EV with 450-km range on single charge.

Lexus has unveiled its first car built specifically on an electric vehicle platform, the RZ 450e. The electric SUV, which is based on the Japanese carmaker's e-TNGA platform like the 2023 Toyota BZ4X, will come with a range of around 450 kms on single charge and a yoke steering wheel, similar to the ones seen inside Tesla's Model S Plaid or Model X. With the ambition to be a 100% electric brand globally by 2035, the Lexus RZ electric SUV is one of its major steps towards that goal.

The design of the new RZ showcases the carmaker's new design language which exudes modernity and aggressiveness. At the front there is a closed grille, the hood has been lowered and the air intake openings have been reduced. The alloy wheels can be opted from a choice between 18 to 20 inches.

Takashi Watanabe, chief engineer, ‘Lexus Electrified’, Lexus International, said, “The RZ has been developed with the aim of creating a uniquely Lexus BEV that feels secure to ride in, is pleasing to the touch, and is exhilarating to drive. DIRECT4, the core technology of ‘Lexus Electrified,’ is (an) all-wheel-drive system that achieves quick and linear response according to driver input. We will continue to take on the challenge of providing customers with new experiences and a uniquely Lexus BEV driving experience."

One of the biggest new features of this Lexus is its steering wheel. The yoke steering wheel will remind one of Tesla Model S Plaid or Model X. With electronically controlled steering, it can do all the manoeuvres with a turn of up to 150 degrees, all with four-wheel drive and all-wheel drive control. The cabin has other attractions such as the digital dashboard or the 14-inch central screen. The design of all the interior is minimalist and elegant, following the Lexus tradition. 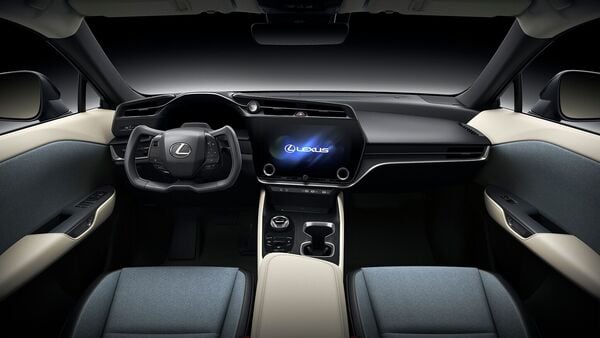 The interior of the Lexus RZ 450e is dominated by a new yoke steering wheel.

The space at the front and rear seats looks spacious and they will have good light thanks to the wide panoramic roof. Added to all this are systems such as Android Auto, Apple CarPlay or a new voice recognition system that responds to the command 'Hey Lexus'.

The Lexus RZ 450e comes with a 71.4-kilowatt battery. The brand promises around 450 kms of range on single charge, thanks to a consumption of 18 kilowatts per hundred kms. As for the electric motors, this SUV has one on each axle. The front axle produces 203 hp and the rear 108 hp. The sum of these two engines provides a combined power of 313 hp. In addition, the RZ will equip the latest driving safety systems with various cameras and sensors.