Honda Cars has released the first official images of the 2023 HR-V SUV that will be launched in global markets in June this year. However, the carmaker has reserved key spec details of the SUV under wraps so far.
By : HT Auto Desk
| Updated on: 05 Apr 2022, 09:04 AM 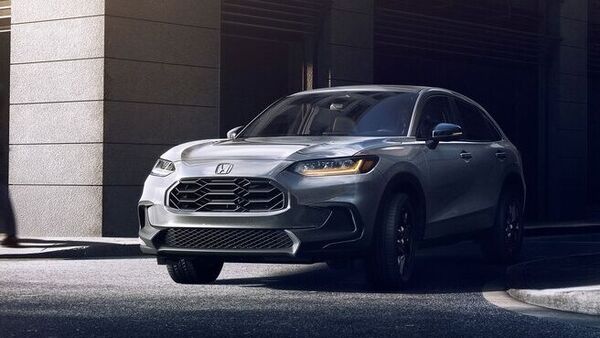 Honda has taken the covers off the second generation 2023 HR-V SUV for global markets. Taller and sleeker, with a longer hood and wheelbase, the 2023 HR-V draws some inspiration from the 2022 Civic, especially its headlights. The new Honda HR-V is also based on same platform used for the Civic. Though the exterior looks and features have been revealed, Honda has kept details about the interiors and the engine and performance specs under wraps. These will be revealed closer to the launch which is expected to take place in June this year.

2023 Honda HR-V appears sporty with expressive design language, featuring a bold new grille, longer hood and sleek roofline. The HR-V is larger than the first generation model, with a longer wheelbase and wider stance. Besides the new grille, the front face is dominated by a set of LED headlights. From the sides the large wheel arches stand out while the rear gets a more dynamic appearance with a spoiler that ends the roof to the contrasting bumper that conceals the exhaust outlets, passing through the new set of taillights.

Honda has not revealed the interior of the 2023 HR-V just yet. However, it promises ‘excellent visibility’ in the new HR-V thanks to the door-mounted mirrors and HR-V's low cowl. The HR-V's windshield wipers hide under the hood line when not in use.

Michael Kistemaker, assistant vice president of Automobile Sales of American Honda Motor, said, "By gaining aspirational qualities beyond its segment, the all-new 2023 Honda HR-V will welcome a new generation of customers to Honda and grow in importance as a gateway to the Honda brand. This new HR-V will advance its position as the segment leader with young buyers, first-time buyers, and multicultural customers."

Honda has not revealed details about the engines of the new HR-V either. However it said that the new HR-V will feature a ‘more responsive engine’ and a ‘new independent rear suspension’. In Southeast Asian countries, such as Thailand, the new HR-V debuted only with the 1.5-litre turbo engine under the hood, while in Indonesia the model will have the e:HEV hybrid option. It is also not defined whether or not the 1.8-litre 16V engine applied in the current national HR-V will be preserved in some version for the new generation.