Honda City 2020 is the longest car in its segment and measures 4,549 mm in length. It is offered in three variants.City 2020 has also managed to get a five-star safety rating in ASEAN NCAP safety tests.The new and previous Honda City cars will be sold side-by-side in India.
By : Shubhodeep Chakravarty
| Updated on: 15 Jul 2020, 06:19 PM 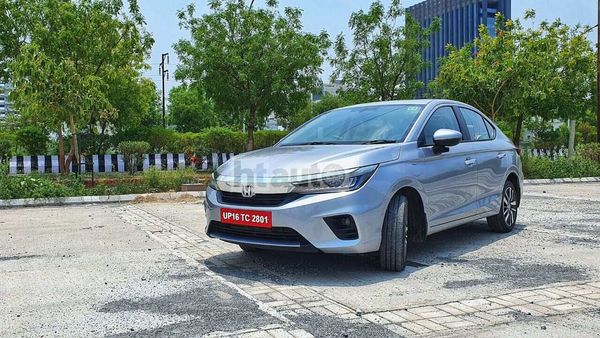 Honda City 2020 has been officially launched in India at a starting price of ₹10.89 lakh and goes up to ₹14.64 lakh (ex showroom prices, Delhi). The fifth-generation Honda City and the preceding model will both be sold by the Japanese car maker here.

While the fourth-generation Honda City was upgraded to meet BS 6 emission norms in late 2019 and it makes sense to persist with it, the latest Honda City manages to raise the bar in several key areas and puts itself out as a strong option in the sedan segment which also features Hyundai Verna 2020 - launched earlier this year, and Maruti Suzuki Ciaz.

The biggest of all changes in City 2020 are in terms of its looks and engine options. The new City looks extremely contemporary and gets heavy design upgrades highlighted by a profile that is now longer and wider than the previous model. A thick chrome strip on the front fascia is flanked by a 9-LED headlight setup on either side. On the side, the wheel arches over the new alloys are more prominent and so is a sharp body line that stretches the entire length of the vehicle. 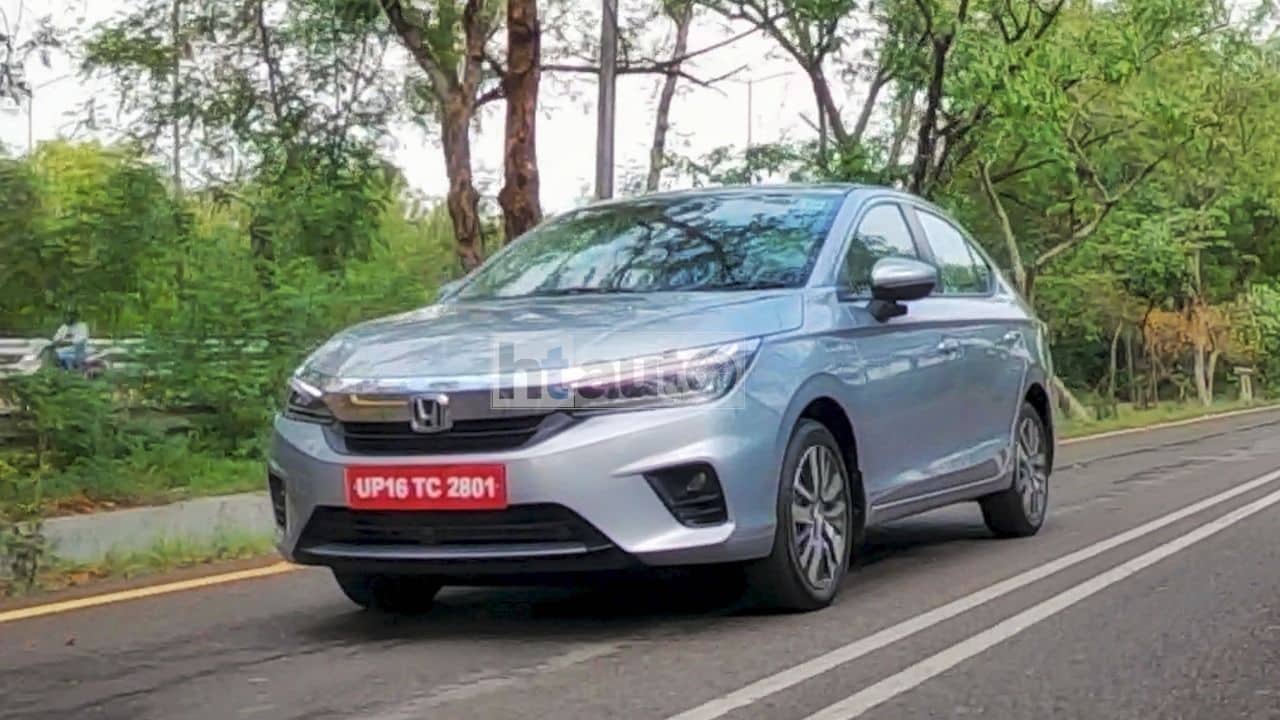 2020 Honda City will be sold along with the existing City on Indian roads. (Photo: HTAUTO/Sabyasachi Dasgupta)

The tail lights at the rear have been reworked and the overall appeal of the vehicle is now extremely up market. This is also obvious because certain styling elements in City 2020 have been brought in from elder siblings like Civic and Accord.

(Also read - A tale of two Cities: Honda City in India and Pakistan divided by a generation)

The upgrades extend into the cabin as well which is now even more well appointed. The seats are plush - the cushioning is three times more than in seats in the fourth-generation City, there's enough leg and knee room for even three passengers at the back and there is a new seven-inch TFT LCD panel behind the steering wheel for the driver. The main eight-inch infotainment unit has also been upgraded. 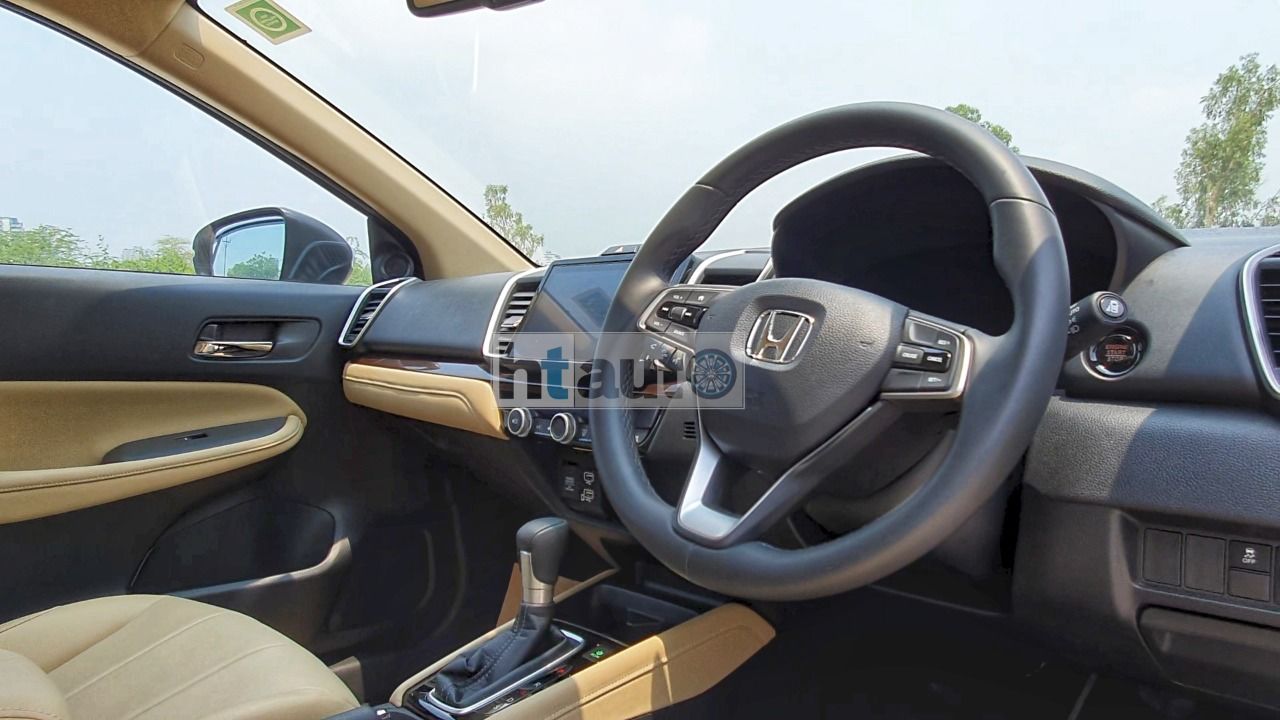 The cabin of Honda City 2020 is even more plush than before. (Photo: HTAUTO/Sabyasachi Dasgupta)

Safety in the new City has been taken several notches up and the most striking addition is a Lane-Keep camera under the left rear view mirror. It puts out a live feed on the central display unit whenever the left indicator is engaged. Apart from this, it also has six airbags, ABS with EBD, vehicle stability assist (VSA), agile handling assist (AHA), hill start assist (HSA), and Honda claims that the new City 2020 weighs slightly more because of the use of ultra-high tensile strength steel frame. The car also offers a first-in-segment walk-away auto lock convenience.

City 2020 is offered with a new 1.5-litre i-VTEC petrol engine and Honda persists with diesel powertrain too courtesy a 1.5-litre i-DTEC motor. While there is an option to choose between a six-speed manual or a seven-speed CVT transmission unit in the petrol, the diesel City 2020 comes only with a six-speed manual option. In petrol, Honda claims a fuel efficiency of 18.4 kmpl in the petrol manual and 17.8 kmpl in the petrol CVT option. The diesel variant has a claimed mileage of 24.1 kmpl. 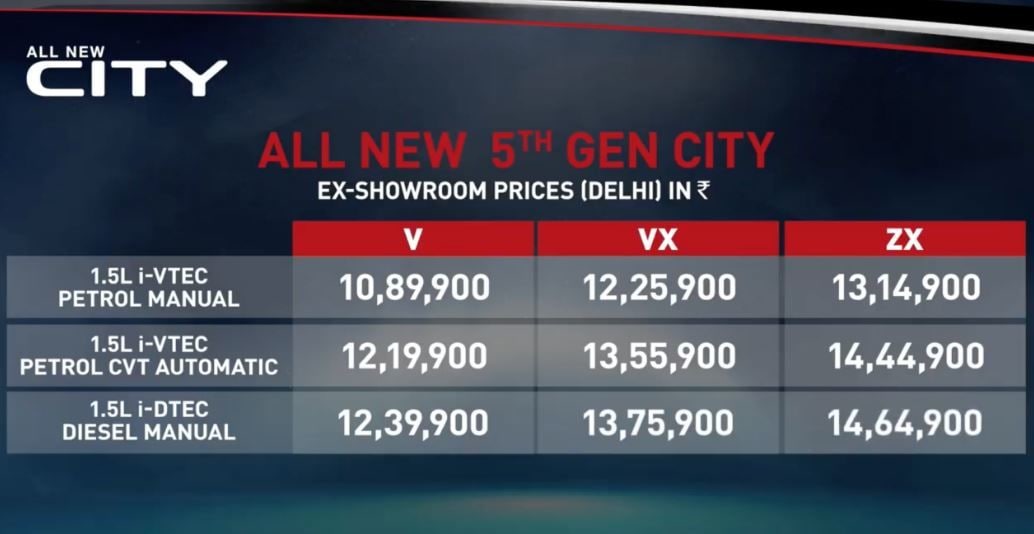 Honda City 2020 is offered in three variants - V, VX and ZX across both petrol and diesel powertrains.