In over two decades, Honda City has established itself as a veteran war horse capable of galloping through the tests of time. The 2020 City seeks to live up to the rich legacy of the car.
By : Shubhodeep Chakravarty
| Updated on: 15 Jul 2020, 18:21 PM

Honda City 2020 takes styling cues from the Accord and Civic which greatly help it with its visual appeal. (HT Auto/Sabyasachi Dasgupta)

Sedans may have taken the bulk of the beating ever since SUVs began flexing muscles in India but one car that has managed to doggedly stand the test of time is the Honda City. Despite being on roads for well over two decades, the City has managed to keep reinventing itself to keep up with passing time and has managed to - with varying levels of success - face off against its newer rivals like Ciaz from Maruti Suzuki and Hyundai's Verna.

2020 marks yet another year which welcomes an updated Honda City and it may well be the strongest package yet from the Japanese car maker which refuses to go down the SUV road, at least in India and at least for the time being.

The new City and the fourth-generation model will be sold side-by-side by Honda.

Does the 2020 Honda City justify the unwavering commitment towards the segment that the manufacturer has? Can it command a serious consideration from prospective buyers who may be in two minds in the sedan vs SUV debate and how well does it fare against its direct rivals? Read on.

A Tale of One City

Honda City 2020 gets sharper body lines on the bonnet and on the side. (HT Auto/Sabyasachi Dasgupta)

Honda appears to have burnt the midnight oil to take a close look at what could work for the veteran City in current times. And visual profile may have emerged as one of the biggest factors because the car is edgy and much sharper than it has ever possibly been.

The City has always benefited from a sophisticated visual design which is not as flashy as the Verna and not as orthodox as the Ciaz either. It has trudged the middle path and in its latest edition, built upon it. It is longer and wider, even if marginally, while the wheelbase remains the same and the height comes down just a tad. Honda claims that it is also more rigid thanks to the use of more high-tensile-strength steel and a stiffer roof section. The car is also 40 kilos heavier than the fourth-generation model and a firewall promises to improve safety and noise insulation levels.

Numbers and factory jargon aside, the new City looks absolutely splendid courtesy a thicker chrome strip highlighting the front fascia of the vehicle which stretches the length between the sharp 9 LED headlight setup which appears to be a 3D representation mimicking ocean waves. 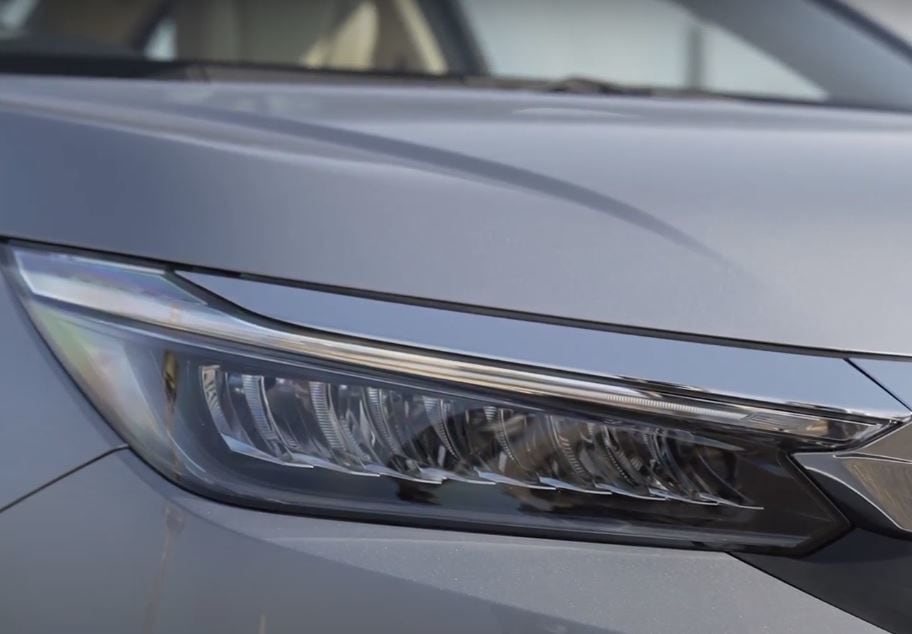 The head lights on the new City are extremely eye-catching.

Over at the side, the new City's enhanced proportions are amply clear and give it an even more upmarket appeal than before. Unfortunately though, the 16-inch alloys, striking as they may appear, look a tad too small under the sedan. In numerical terms, the ground clearance is the same but it just appears that the new City sits slightly lower than the older version.

Ever seen a Japanese Katana sword? That's the inspiration behind the body line on the side which stretches from well over the front wheel arch to the tail lights. It may not lend a menacing appeal to the vehicle but it does lend a certain flavour to the design philosophy at play.

The rear of the new City is also a whole lot smarter with a fresh tail light design that may be the most upmarket in the segment. 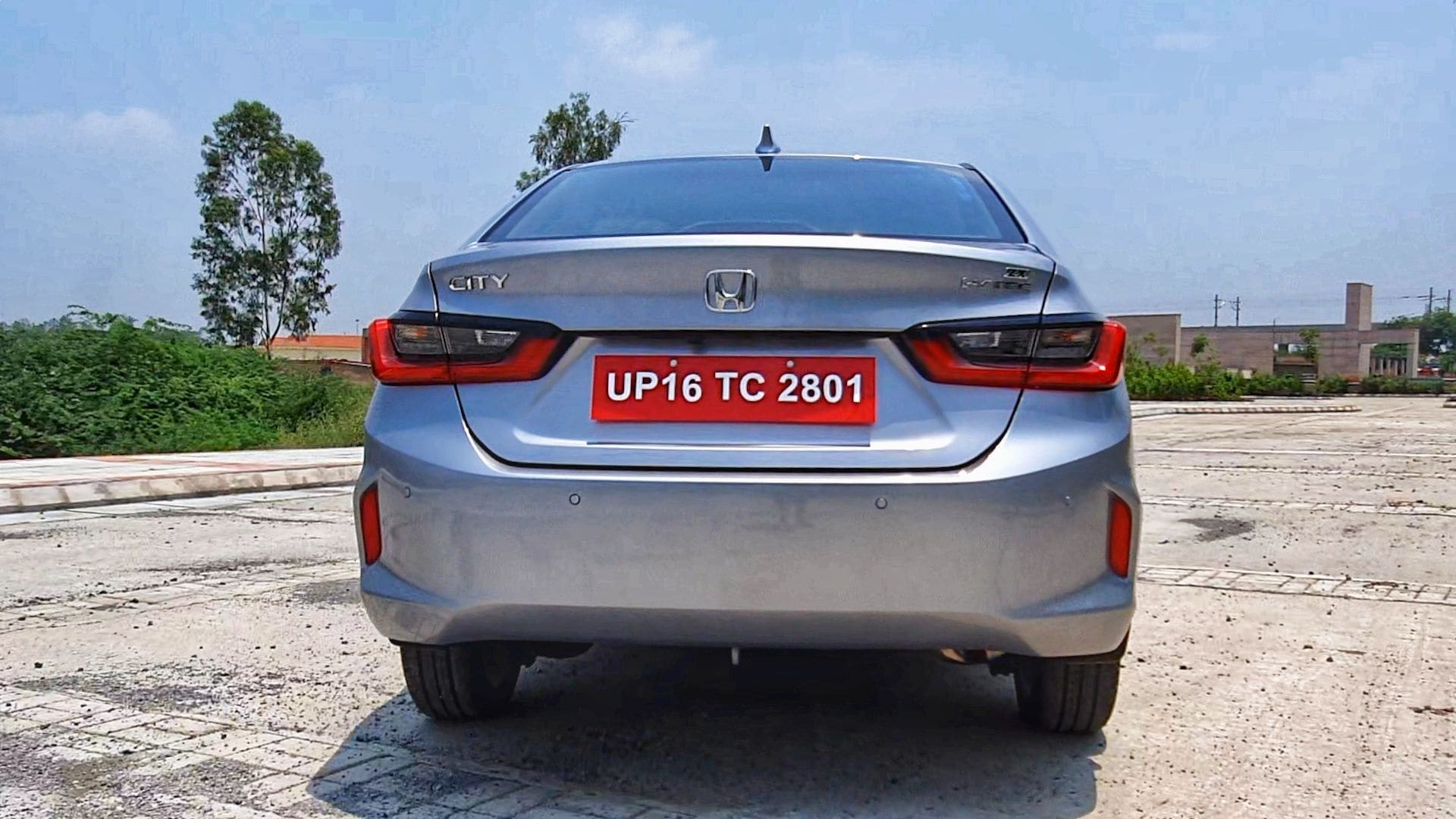 The overall design language on the 2020 City takes cues from its elder siblings like the Accord and Civic and this helps it look more premium than ever before while retaining its ability to look understatedly stylish. Think Sylvester Stallone in Rambo, not Arnold Schwarzenegger in Commando.

The cabin of the new City is once again on the mark, almost, in terms of offering a clean and svelte visual appetite.

But before the good, the bad. Use of hard plastics continues in the 2020 model with the dash and side door hosting the bulk of it. And while soft-touch materials do make way in - like under the pleasing faux-wood dash trim, the discerning eye would be left a little wanting.

Apart from this, there's not much to fault the City cabin for. The brown and black dash design is fresh and houses an eight-inch infotainment system which is now more capable than ever before. Honda claims the screen has been layered with optical bonding application to address reflection problems but under direct sunlight and in the brightest possible setting, it is still quite strenuous for the eyes. A possible reason could be because the screen is tilted upwards ever so slightly. 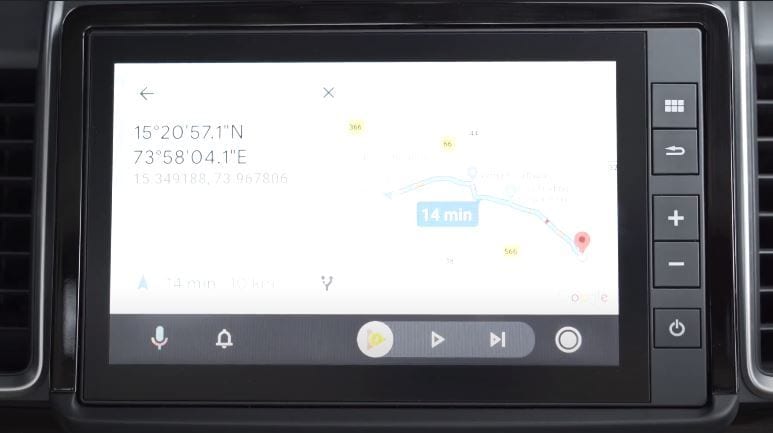 The infotainment screen in the 2020 Honda City. 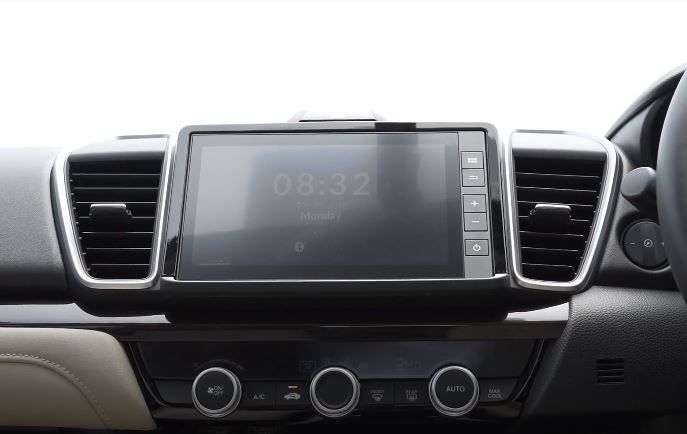 The central display suffers from some degree of washout, especially under direct sunlight.

There is no such trouble with the seven-inch TFT LCD panel behind the steering wheel which is perfect in how it displays vehicle information and how it incorporates the digital tachometer.

The HVAC knobs are backlit and the additions of brown leather material add a refined touch. The quality of stitching also appears to be of good standard and it is most noticeable in the seats.

The front seats are contoured well and offer a lot of support for the under-thighs. The rear seats though are the real winners and the plush quality of these in the fourth-generation appears to have been built upon. There is generous amounts of leg space while shoulder area for three abreast has also been improved. The headroom could have received a slight bump up but over all, the car does a great job of being well proportioned. It may be a City but it should be right at home out on highways too, as always. The rear seats are once again the best place to be at inside the City from Honda.

And for those long drives, there are enough storage options inside the cabin - on the doors, in the rear arm rest etc - to keep things tidy. Boot space is at 506 litres, a microscopic 4 litres down which is of very little negative implication. 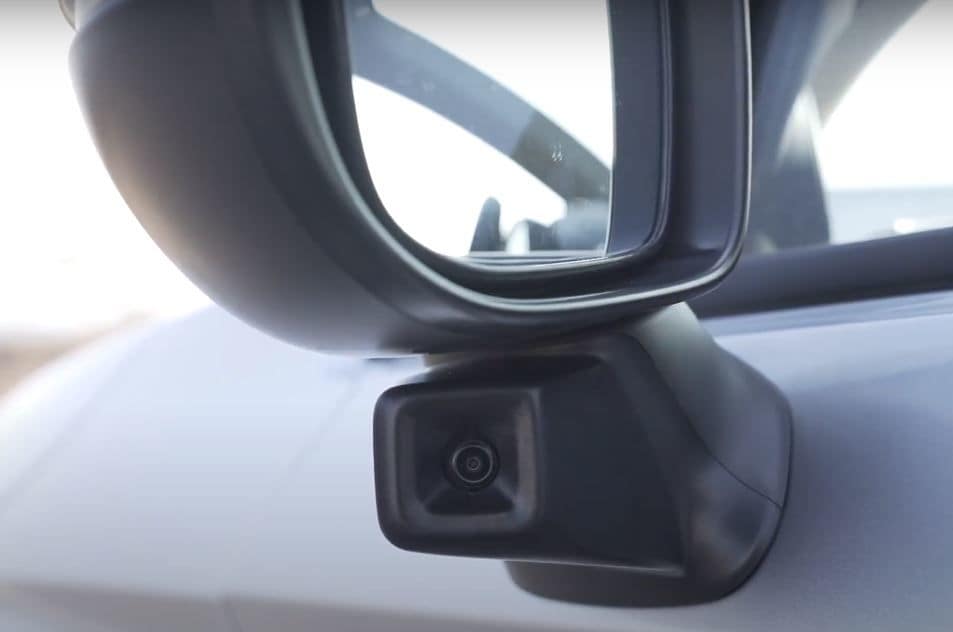 A camera under the left side mirror provides live feed to the center console whenever the left indicator is activated. This is a neat safety feature to eliminate risks from blind spots. 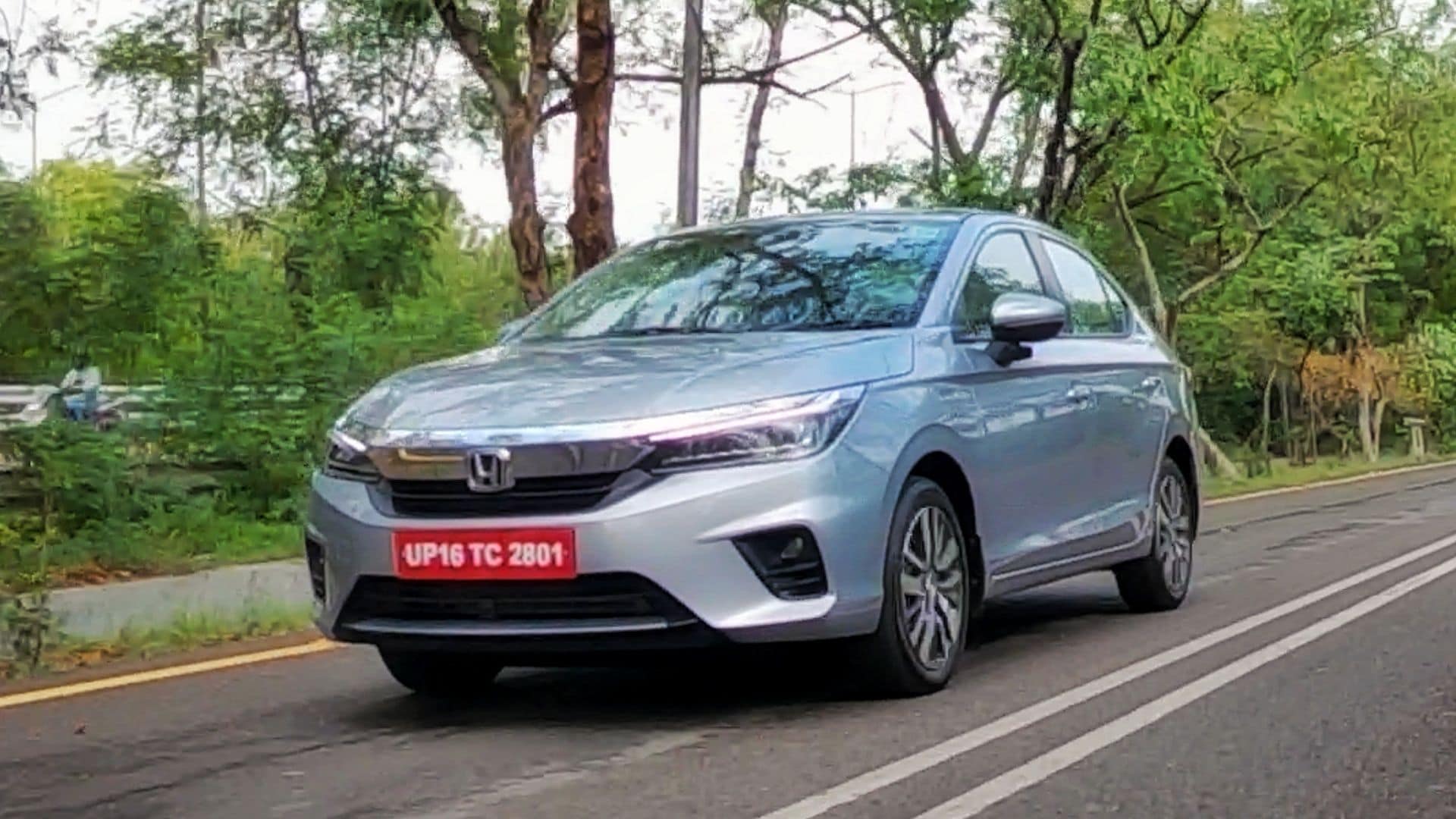 The all-new 1.5-litre DOHC petrol engine was the main drive test objective in this review and it did not disappoint for most parts.

The 2020 City petrol pulls itself clean in almost all gear ratios and while there is a slight grunt at around 2500 RPM mark that could take some getting used to, the sedan hardly leaves one exasperated on open roads. In traffic conditions, it has always been more than capable and the new engine stays true to the genetics. The auto transmission box works well till triple digit speeds but the CVT does come under some degree of strain once again at anything far higher than that. Honda has sought to mitigate some of it by what it calls full-open acceleration step-up shift control' which essentially means a step-wise auto gear shifting corresponding to speeds. To the driver at large, it may mean little at speeds well past the triple digits but those speeds are hardly advisable and never road legal anyway. 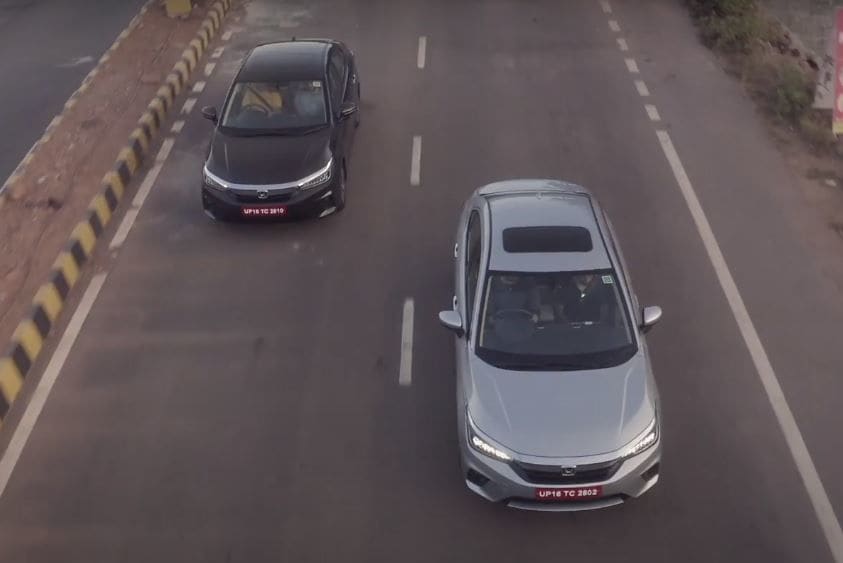 Honda City continues to be right at home in city conditions and offers a plush ride on open highways.

Coming to fuel economy figures, Honda highlights that the car will go around 18.4 kilometres to every litre of fuel it gulps which is a trickle more than before.

The new City, with all of its stylish and practical upgrades, is unlikely to lure a die-hard SUV fan towards it. But it does make an extremely solid case for itself for anyone with even an iota of affection for sedans. It looks upmarket, comes with advanced features which now also includes Alexa compatibility - one can turn on the ignition, switch on the AC, open boot and more using the app on phone, gets an all-new petrol engine and has plush interiors that deserve a reckon.

Honda's persistence with City is well justified in the fifth-generation that is now available for pre-bookings and will be officially launched at some point in July.