Honda designers have revealed the key elements behind the new design language was sportiness, long and stretched-out exterior to make it appear longer and wider.
By : Sabyasachi Dasgupta
| Updated on: 04 Jul 2020, 15:11 PM 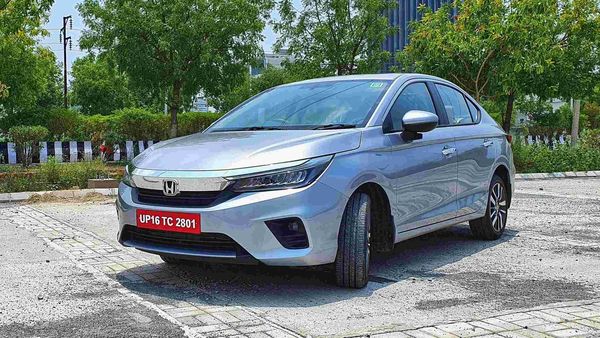 Honda City 2020 gets sharper body lines on the bonnet and on the side. (HT Auto/Sabyasachi Dasgupta)

2020 Honda City is set to be launched on July 15. The fifth generation Honda City has undergone some key changes in its design which makes it stand out as a very up-market sedan.

Honda designers have revealed what inspired the new design language. In a video shared by the carmaker, the Japanese designers said the look and feel of the car was inspired by imaginations of 6-year old kids.

Satoru Azumi, the chief designer for 2020 Honda City said his team created a design from the perspective of a child’s understanding of a car. Long, sporty and stretched out were the three keywords based on which the basic design of the 2020 Honda City was conceived.

For the exterior design of the car the designers implemented a concept called ‘Standing on the Edge’, which brought in the elements of sportiness and cutting edge.

The 2020 Honda City is characterised by the sharp edge character line that runs across from the LED headlights to the taillights at the rear, creating a straight line just like the shape of the Japanese sword - the Katana Blade.

The new Honda City also has transformed from a crouching look to a straighter, more horizontal body line. The designers say that this change makes the car look even longer than it actually is and makes its presence a lot bolder. The strategy to go for a lower and longer trunk also made it appear stretched.

The length of the new Honda City has expanded by 109 mm, and the width by 53 mm. The changes in dimension has made it one of the longest and widest sedan in its category.

Even the new-look taillights, that now expands from the rear to the side of the car, helps the car appear wider.

The 2020 Honda City boasts of several upgrades and will be sold along with the existing model in the market. The sedan gets a mile-long list of visual upgrades which is primarily highlighted by a thicker chrome strip and a sharp 9 LED headlight setup at the front. Strong body line on the side, new 16-inch alloys and stylish tail lights.

Under the hood, there is an all-new 1.5-litre petrol engine as well as a 1.5-litre diesel unit. Both engines meet BS 6 emission norms and the former also gets CVT gearbox option which is better tuned now.