Honda City 2020 gets several style upgrades and is packed with features.The fifth-generation City will be sold along with the existing model.
By : Shubhodeep Chakravarty
| Updated on: 04 Jul 2020, 15:25 PM

Honda Cars India on Saturday confirmed that City 2020 will launch officially on July 15. The fifth-generation sedan was scheduled to be launched earlier this year but Covid-19-related challenges had pushed back the dates.

City 2020 boasts of several upgrades and will be sold along with the existing model in the market. The sedan gets a mile-long list of visual upgrades which is primarily highlighted by a thicker chrome strip and a sharp 9 LED headlight setup at the front. Strong body line on the side, new 16-inch alloys and stylish tail lights complete a very up-market design language on the car.

On the inside, Honda has improved the feature list to help City 2020 compete against its direct rivals. The car gets an eight-inch infotainment system, backlit HVAC knobs, faux-wood dash trim and a left side mirror camera which sends video feed to the centre screen when the lane change indicator is activated. The car is also now Alexa app and Honda app compatible which means the ignition can be turned on or off, AC can be controlled and boot opened using a smartphone. Parking lights and alarm sounds can also be activated using the feature which can be helpful in crowded parking spaces. 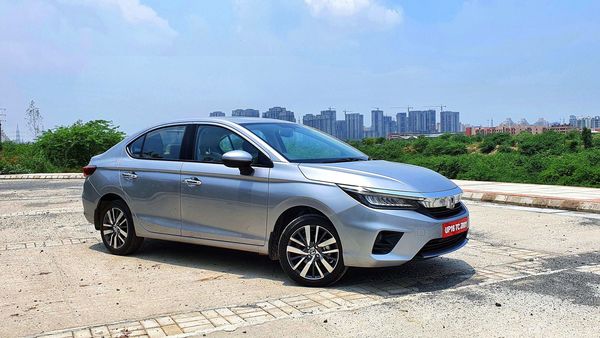 Honda City 2020 takes styling cues from the Accord and Civic which greatly help it with its visual appeal. It is also wider and longer than the existing model. (HT Auto/Sabyasachi Dasgupta)

Under the hood, there is an all-new 1.5-litre petrol engine as well as a 1.5-litre diesel unit. Both engines meet BS 6 emission norms and the former also gets CVT gearbox option which is better tuned now.

At a time when sedans continue to lose their charm to SUVs of all shapes and sizes, Honda has managed to give City a new life and it could well help it challenge the likes of Maruti Suzuki Ciaz and Hyundai Verna. All eyes now would be on how the pricing structure is - not just vis-a-vis rivals but to also answer queries from City fans about which model to choose.