e-tron is the first electric Audi EV all set to enter Indian car market. Scheduled for launch on July 22, e-tron will go up against EVs from Mercedes and Jaguar. Here's the first-drive review of the latest Audi.
By : Shubhodeep Chakravarty
| Updated on: 20 Jul 2021, 12:25 PM

Audi e-tron gets a 95kWh battery and claims to go from 0-100kmph in 5.7 seconds. (HT Auto/Sabyasachi Dasgupta)

Audi e-tron has been an extremely awaited electric vehicle (EV) in a country where while luxury vehicles powered by battery aren't really going to bring about a revolution, do promise a mighty lot for anyone with the big bucks to make an addition to the garage. Much like Mercedes-Benz EQC and the Jaguar I-Pace which have been launched here, the Audi e-tron is hardly going to be the first vehicle in anyone's garage, something Audi seems to have gauged well in the form factor of this typically Audi SUV with an electric heart and electrifying dreams.

Gone are the days when Audi had a passionate, almost amorous affair with diesel engines. And the e-tron marks a paradigm shift away from those menacing TDI engines that were oh-so thunderous. But assuming that the Audi e-tron isn't every bit as powerful, every bit as capable and every bit as exciting to drive would be a mistake made at your and your peril alone.

Gliding in on a Monday morning, the blue-coloured Audi e-tron effortlessly swayed into my garage for a test run and by the end of what was a rather blazing day out - literally, the mercury was at 43 - here's what emerged as my biggest takeaways: The Audi e-tron weighs around 2.5 tonnes and the weight is quite evident in straight sprints. But this EV also has a steady and composed demeanor around it, helped much by the air suspensions. (HT Auto/Sabyasachi Dasgupta)

Imagine an RS that is calm, cool and composed. Did someone say 'oxymoron'? And yet, that is exactly how I would describe the Audi e-tron as when on the move. Yes, we are starting out with the drive itself and it is safe to say that while the ears of the enthusiast may miss the roar of a boisterous engine, all other senses are well taken care of by this EV that has a 95kWh battery pack for a heart.

Up until this point, if anyone feels I am indulging a bit much on melodramatic descriptions, sample this: Despite weighing around two and a half tonnes, the e-tron can shoot from zero to 100 kmph in 5.7 seconds, only slightly slower than the Mercedes EQC (5.1 seconds) and around a second slower than the much-lighter Jaguar I-Pace.

The uptick? It feels more steady and stable at high speeds while still allowing the electric motors to lend the vehicle an agile ability. Throttle responses are instantaneous - expected in an EV - but the precision with which the e-tron will also manage turns, the embrace between the tyres and the roads, do indeed make for a no-nonsense, clean-cruise kind of a drive experience. Alas, a bit more grit in the brakes and a 'not-just-a-bit' more feedback from the steering wheel could have been the absolute icing, ensuring even RS fans are left mighty impressed. 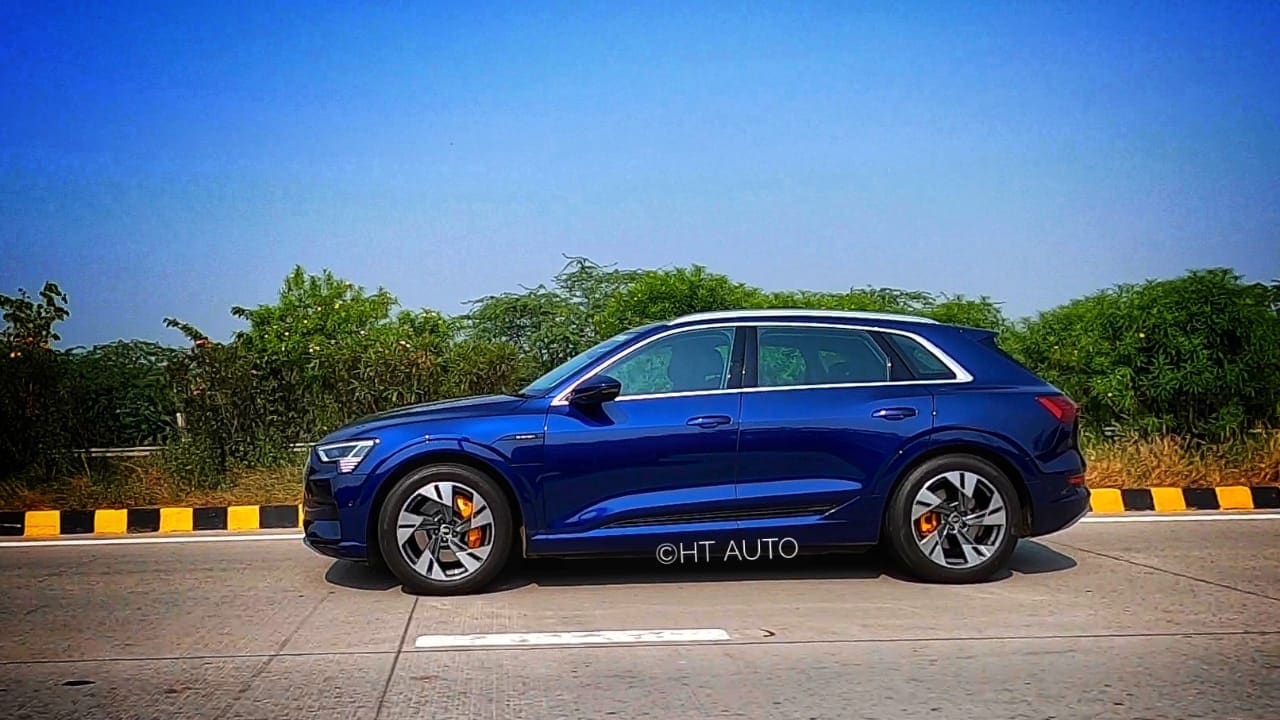 But with great EVs come great anxieties - range anxieties. And the e-tron isn't different from any of its rivals when it comes to this aspect. Tame your tempers and this Audi EV will give you the best possible range possible from it. Which, for the record, would be around 480 kilometres at absolute best. In my day out, the test unit did around 180 kilometres on mostly open stretches and with a bit of sandy terrain trespassing. Even with the AC on at full blast, the occasional pedal to the metal when road conditions allowed, there was 55% charge left at hand-back. The Audi e-tron has charging points on either side and the flaps can be opened at the press of a button. (HT Auto/Sabyasachi Dasgupta)

And even then if you are unsure, pensive even, the central infotainment panel will allow you to set a target range and the car will adjust features and functionalities to help you achieve the figure. Or get close to it at the very least. Yes, it is an Audi and yes, it does still pleases us with those little gadgetry wonders.

Counter Back to Cabin:

The cabin of the Audi e-tron isn't radically different from any of the cabins inside high-end luxury SUVs from the German giants. And I am not complaining here because I have always been quite sold with the idea of a well-appointed dash, a driver-oriented central console stack, soft-touch materials and an infotainment screen that is large and responsive. Yes, the 10.1-inch central infotainment screen is the crown once again in the cabin of the e-tron and can be made use of for a wide variety of functions which now also include checking and setting target drive range. There are no jarring graphics, not much EV jargon and definitely not overtly intimidating as can often be for many.

The haptic feedback on inputs are nice but operating it on the move may not be advisable as these inputs need to be firm and precise. There is also a second (8.6 inch) screen under the main unit to control operating HVAC. Of course, some of the functionalities can also be controlled via steering-mounted buttons. These buttons are also how you would operate the large driver display behind the steering wheel. A head-up display (HUD) is another great addition here. Do note that the gear shift lever on the center console could take a slight bit in getting used to but everything else is rather well appointed. This includes the seats which, while not being an obscene example of automotive comfort and premium-ness, is par for the course. There is enough space for four passengers but while the floor is flat, the central console unit jutting back does cut down some space for the middle-seat passenger. What does help e-tron's case is that the driving and riding position is sufficiently high and combined with the large sunroof, could be a pleasant place to be at. 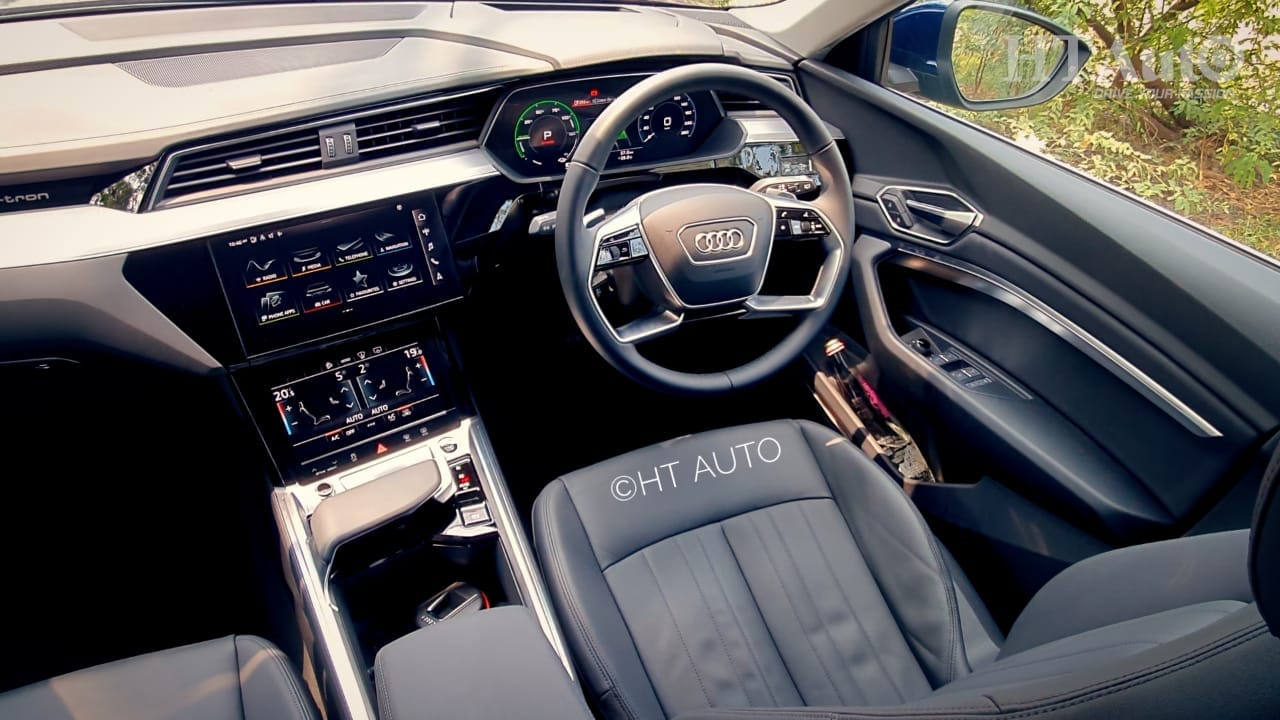 A look at the driver section in the Audi e-tron. (HT Auto/Sabyasachi Dasgupta)

Then there are privacy curtains on the rear doors, Bang and Olufsen music system, gorgeous ambient lights and a really large boot that is big enough to pack a week's worth of luggage even if the loading height is a bit much.

Let the Looks Speak Some More: 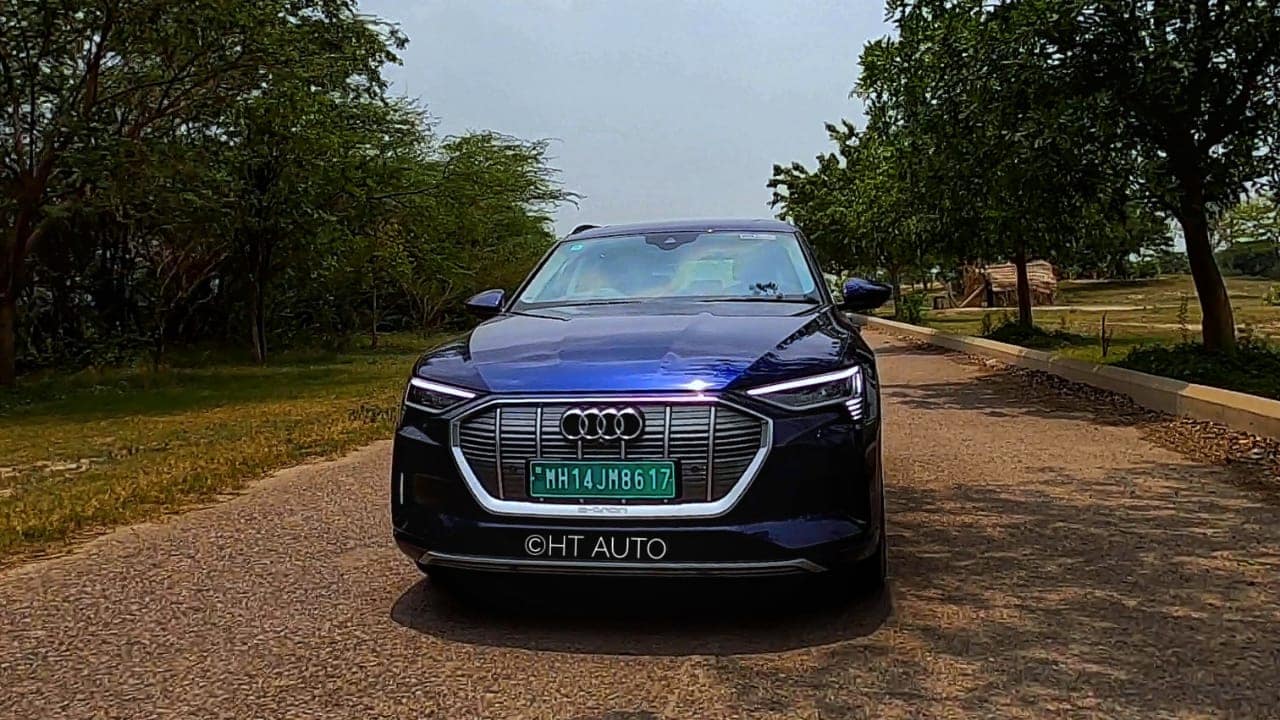 The grille and the green registration plate immediately signal that this here is an Audi EV even if the face of the car does resemble that of some of its ICE siblings. (HT Auto/Sabyasachi Dasgupta)

Despite being the first EV from Audi in India, the e-tron (also) doesn't look much different from its siblings in how it has been designed. And much like how it is in the cabin, this works on the outside as well.

The hood has a prominent form factor and is ornamented with Matrix LED headlights which promise bright illumination minus glare for oncoming motorists. The DRLs are integrated and it is in fact the grey-glazed grille here which reveals that this here is an Audi of a different kind.

The alloy design too is different, rather funky and the large body coloured wheelarches give the e-tron a bit of heft. The window line is large but that's something you would expect from an Audi unless it is a Q2. The rear gets LED pattern lights look absolutely hypnotic at night and the back profile is completed with a silver skid plate at the bottom. And of course, no exhaust pipes.

The Audi e-tron looks like a conventional SUV while seeking to be something more. For someone looking for a stylish EV option, there is also the e-tron Sportback that is launching in the country alongwith the e-tron - and the date is July 22. But even on its own, the e-tron has got the style and panache to stand out. It isn't quite as large in appearence as the EQC but is definitely not coupe-ish like the I-Pace. It is a fine balance.

And while it also may not be anywhere close to being as quick as the I-Pace or even the EQC, the e-tron offers a spacious cabin, a slew of range-related enhancements, a polished cabin and a comfortable drive experience that could find favour among existing Audi customers while also possibly bringing in new clients from rival camps.

Expected to be priced well north of ₹1 crore, the e-tron has been brought in via CBU route and will stand out as a compelling option in the luxury EV segment in the country.