Home Auto Cars News A Car That Emits Water Vapour: Is Bmw's I Hydrogen Next The Cleanest Car Ever?

A car that emits water vapour: Is BMW's i Hydrogen NEXT the cleanest car ever?

At a time when the economic crisis induced by coronavirus is taking its toll on the auto industry, the BMW i Hydrogen NEXT is more than just an announcement.
By : Sabyasachi Dasgupta
| Updated on: 04 Apr 2020, 11:50 AM 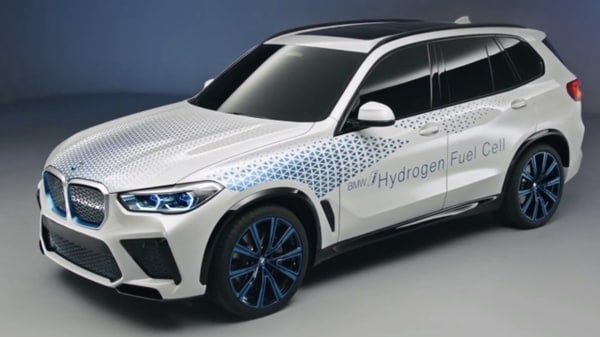 Photo of BMW i Hydrogen NEXT based on the X5 SUV

The i Hydrogen NEXT will debut as a small test vehicle in 2022. The prototype of the vehicle was showcased in 2019 at the Frankfurt Motor Show.

According to BMW, the fuel cell system for the powertrain of the BMW i Hydrogen NEXT generates up to 125 kW (170 hp) of electrical energy from the chemical reaction between hydrogen and oxygen in the environment.

This means that the vehicle emits nothing more than water vapour, as all other hydrogen vehicles do, but that the electrical converter located under the fuel cell adapts the voltage level to that of the electric drive and to the battery, which is powered by braking power and fuel cell power.

It also has a pair of 700 bar tanks that can hold six kilos of hydrogen. "This ensures a long range regardless of weather conditions," promises the Vice President of hydrogen fuel cell technology and vehicle at the BMW Group, Jurgen Guldner.

The maximum power battery attached to the electric motor  injects an extra dose of dynamics when passing or accelerating.  The total power of the system will be 275 kW (374 CV).

Details are not yet confirmed as far as the range of this car is concerned. However, it is expected to be between 600 and 700 kilometers.

The fifth-generation eDrive unit, set to make its debut in the BMW iX3, is also fully integrated into the BMW i Hydrogen NEXT. The peak power battery positioned above the electric motor injects an extra dose of dynamics when overtaking or accelerating. The total system output of 275 kW (374 hp) fuels the typical BMW driving dynamics. This hydrogen fuel cell electric powertrain will be piloted in a small series based on the current BMW X5 that the BMW Group plans to present in 2022.