The latest spy image of 7-seat Compass arrives from Brazil where it is currently being developed.
By : Prashant Singh
| Updated on: 12 Jun 2020, 21:10 PM 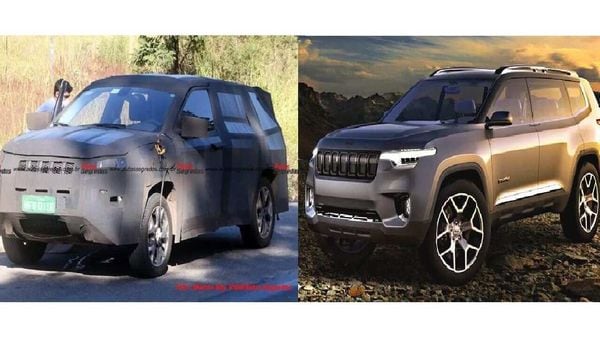 It is no news that the 7-seat Jeep Compass is under development and will be introduced in the international market by as early as 2021. Its latest spy image arrives from Brazil where it is currently being developed.

Known by the codename: Jeep D-SUV or Project 598, it is basically a longer Compass designed to accommodate more people. It will be based on the Compass’ monocoque platform but will have significantly changed dimensions, style and bodywork.

The spotted prototype sits underneath heavy camouflage and hides away all the necessary details, but it won't be wrong to assume that the front section will still look unmistakably 'Compass' with some alterations done to the front bumper, lights etc. As the image suggests, over the sides, it's equipped with 18-inch wheels, somewhat similar to the ones currently found on the Compass Limited Plus variant.

Expect major design alterations beyond the B-pillar, and the rear-section will have some significant body and styling changes. Also, what's easily identifiable is the stretched-out rear-overhang which should carve out more space for the third row occupants.

For the Brazilian market, the 7-seat Compass will be a 'diesel only' model, but as far as Indian market is concerned, no such developments are confirmed yet.

What's certain is the 2.0-litre MultiJet II diesel engine which is also shared with the Tata Harrier and MG Hector. In the standard Compass, this engine is known to produce 173 PS and 350 Nm. Though there is a possibility that the longer Compass might get this unit in a more powerful state of tune.

The transmission options may include a 6-speed manual and 9-speed automatic units. Also, an AWD option could find a way somewhere in the package.

Most likely it is going to be a ₹25+ lakh product.